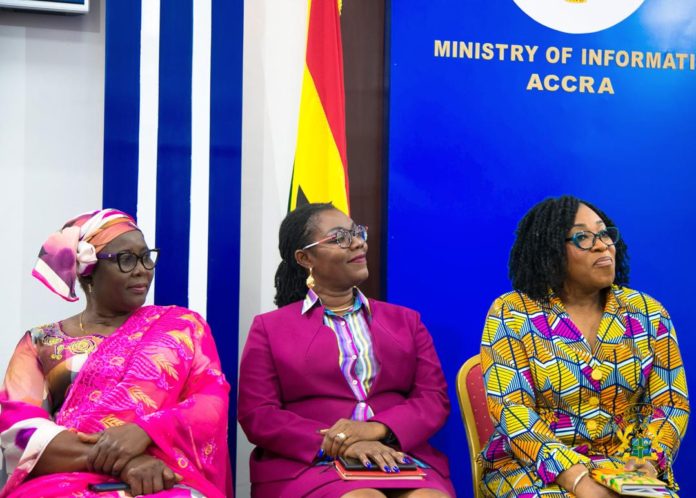 Three(3) female appointees of the Akufo Addo administration has defended President Akufo Addo's comment at the Women Deliver Conference in Canada that he is yet to see dynamism in Ghanaian women.

The President at a recent conference in Canada suggested that not enough movement is being made by women to take up key positions in governance; and that although 30 percent of his cabinet are women, they are not seeing enough dynamism and activism from the women. But the comment has received criticism by the opposition NDC and some women activists who feel the President presented a negative picture about women.

“We are not seeing enough dynamism and activism on the part of those who are seeking. I am talking about dynamism where it matters…electing people to Parliament, controlling political parties because they are the instruments by which our societies make decisions.

At a news briefing in Accra, some female appointees of the Akufo-Addo administration jumped to the defence of the President and thanked him for speaking out to challenge women to take up bigger opportunities.

Minister for Local government and rural development Hajia Alima Mahama said: ”President Akufo-Addo did no wrong because he was calling on women to use their agency to amplify their voice in decision-making positions''.

She said the President had championed and exhibited much commitment in empowering women.

”He has worked to ensure women are involved in major decision platform. But It is about time women push their numbers with their agenda” she said.

The Minister for Communications, Mrs Ursula Owusu Ekuful said some former appointees under the previous NDC government criticizing the President were been hypocritical on the matter.

”The President has challenged us and we should take up that challenge. We thank him for waking us up to do more as women” she added.

On her part, the Minister for Foreign Affairs and Regional Integration, Shirley Ayorkor Botchway said those criticizing the President were only trying hard to score political points and must be ignored.

She praised the President for working with more female appointees under his administration who are helping to fulfil his agenda of creating prosperity and equal opportunity for all.

Meanwhile, the former Minister of Gender under the Mahama led administration, Nana Oye Lithur said the President’s comment made her cry as a Ghanaian woman.

“President Akufo-Addo made me cry, I cried when I watched the video. To have a human rights lawyer speak and address gender issues in the way he addressed, very regrettable. He couldn’t even get his data right. Even the representation of women in his cabinet, he couldn’t get that right”.