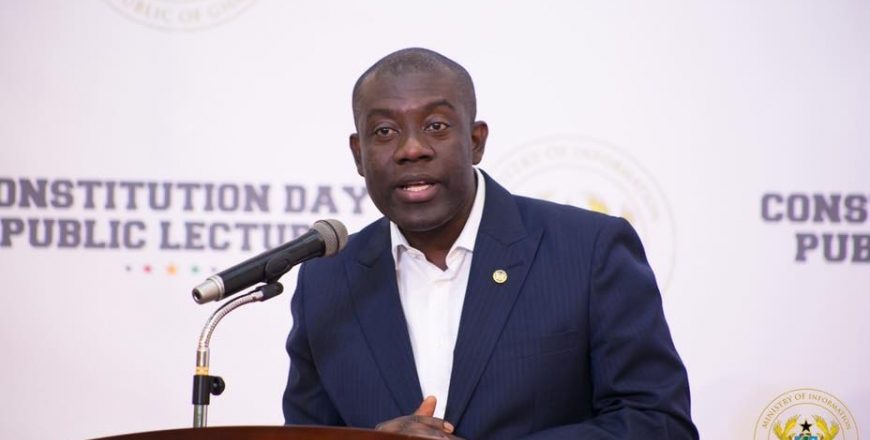 The Information Minister, Kojo Oppong Nkrumah says the President’s comment on gender parity did not seek to discredit the efforts made by women, but rather, only sort to give the impression that there are a lot more women can do.

The Information Minister's statement comes at the back of President Akufo-Addo's comment at the 2019 Women Deliver Conference which resulted in a backlash by Ghanaians.

The President in his contribution at the Women Deliver Conference in Canada said he is yet to see dynamism in Ghanaian women.

“We are not seeing enough dynamism and activism on the part of those who are seeking. I am talking about dynamism where it matters…electing people to Parliament, controlling political parties because they are the instruments by which our societies make decisions.

According to Mr Oppong Nkrumah, some individuals have misconstrued the President’s comment on the subject and pointed out that the President only sought to make a point about the need for women to step up their quest and forcefully put up a fight in areas of concern and where it matters most.

Speaking in an interview on Citi FM, Mr Oppong Nkrumah said the President's comment only gave the impression that there are a lot more women can do.

“What people seek to do, is to draw the President into a conversation of should it be empowerment of women amplification. The President makes the point that [with regards to] empowerment and amplification, he has seen it all and he has done it all and even currently and even going beyond that to ensure that specific initiatives are put in place to build up a young girl child upwards. But one of the things he sees missing is a to see a lot more dynamism in the fight, dynamism demonstrated by the women themselves, that the women themselves need to forcefully put up the fight where it matters most.”

“A lot is being done now, he is not saying all is useless or not important? But we need to see more women to put themselves up.”

Oppong Nkrumah who also doubles as the Member of Parliament for Ofoase-Ayirebi described Akufo-Addo as one of the country’s strongest champions of gender parity.

“The President has been one of our strongest champions for gender parity in our public life. In 2008 when he was selecting a Vice-Presidential candidate, his first choice was a woman. In 2012 he was the one who argued that women potential candidates in the NPP should be protected and should be given less of a fee to pay when they contest. He has been the President who has appointed the largest number of women in his administration, the numbers are all there. His commitment to gender parity is not in question.''

Some gender activists at the 2019 Women Deliver Conference in Canada were not enthused with President Akufo-Addo’s submission on women empowerment in Ghana.

The President at the conference had said, despite the majority being women in Ghana, not much political and social action had been witnessed in their push for greater inclusion in Ghana’s political administration.

Meanwhile, a gender activist who was a former Gender Minister, Nana Oye Lithur reacting to the comment made by Akufo Addo at the 2019 Women Deliver Conference in Canada said that the statement made her cry as a Ghanaian woman.

“President Akufo-Addo made me cry, I cried when I watched the video. To have a human rights lawyer speak and address gender issues in the way he addressed, very regrettable. He couldn’t even get his data right. Even the representation of women in his cabinet, he couldn’t get that right”.