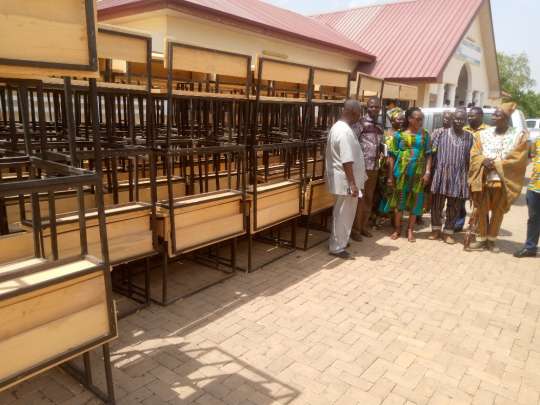 Mr Timothy Yuornuo, the District Director of Education atÂ the Nabdam District of the Upper East Region says schools in the area has over 6,000 furniture deficit.

He said the deficit was huge across all levels of basic education, which was adversely affecting academic performance of pupils.

â€œThe furniture deficit in the District is so huge, we have over 6,000 furniture deficit-cutting across the three basic school levels, that is, Kindergarten, Primary and Junior High Schools,â€ he said.

Mr Yuornuo disclosed this when Madam Agnes Anamoo, the District Chief Executive, presented 240 pieces of dual desks and 280 mono desks to selected schools in the District.

Despite the furniture challenges, coupled with poor infrastructure in some schools, the District last year improved upon its performance at the Basic Education Certificate Examination (BECE), he said.

He commended the Assembly for providing the furniture saying it would go a long way to boost teaching and learning.

He appealed to other Non-Governmental Organizations and philanthropists to augment governmentâ€™s efforts and assist schools in the area with furniture and other infrastructure to enhance academic work.

Government recently gave the Directorate a new pick up and five motorbikes for circuit supervisors to aid monitoring and supervision, Mr Yuornuo said.

The guidance and counseling units of the schools would speak to candidates to make them appreciate the need to be punctual and take their studies seriously, he said.

Madam Anamoo indicated that the furniture was procured through the District Development Facility and the Assembly was in the process of procuring more furniture to help solve the furniture deficit.

She said education was key to total development of the people and all efforts would be channelled to addressing the challenges in the sector, she said.