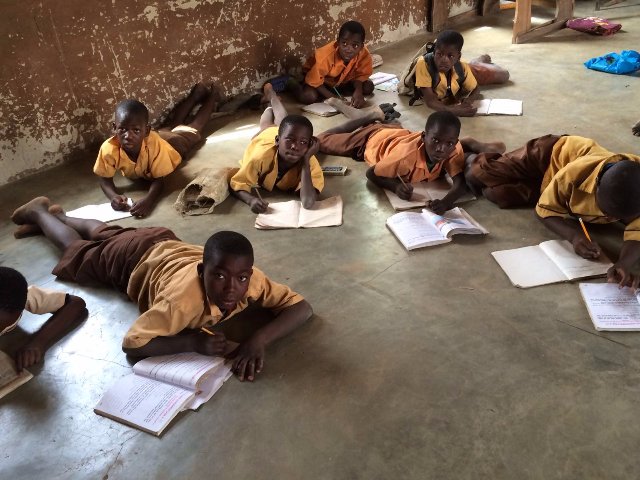 Pupils of Bosuoyir M/A Primary School in the Wa Municipality are exposed to bad weather conditions and unhygienic environment as several of the pupils sit on the filthy floor to receive lessons.

The school, established in September 2014, manages a total enrolment of 107 pupils and has its primary two, one and Kindergarten one and two pupils, numbering 80, cramped into one classroom without a single desk or teacher’s future.

A resident member, Kijemore Charles, spoke about the dire challenges facing the school, said: “As you can see, there is no single desk for the 80 pupils”.

Pupils overcrowded in a single classroom sit on the open dusty floor, under severe heat and sweat with its attendant health hazards, waiting to be taught during contact hours.
It was discovered that 11 pupils in primary five had only two of the dual desk furniture when the GNA visited the school premises.

Three dual desks furniture were also available for seven pupils in primary six while about four pupils were seen sharing one desk in the remaining classrooms during the team’s visit in the morning.

Some teachers were also seen sitting on broken tables, chairs and others on kitchen stools.

The teachers, who pleaded anonymity due to strict orders from Ghana Education Service (GES) Directorate warning against speaking to the media without permission, were unhappy that despite several letters written to GES requesting assistance, there has been no response.
Metal gate of the school is being used as a teaching board for kindergarten pupils. “This iron gate, was removed to serve as a blackboard for the kindergarten pupils, you know we have to improvise,” one teacher said.

Mr. Kijemore, who looked visibly worried, said the deplorable situation in the School was undermining smooth academic work and ruining the future of children living in the community located 18 kilometres away from Wa.

The school was provided with 45 dual desks during the onset of its establishment but many of them have broken down due to overuse following upsurge in enrolment.

Mr. Kijemore appealed to the Wa Municipal Assembly and the GES to assist the school to prevent any outbreak of a disease like cerebral spinal meningitis due to excessive heat emanating from the overcrowding.