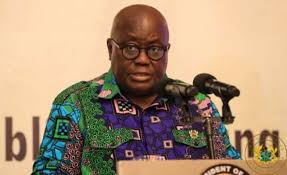 He made this known in his 10th address to Ghanaians on measures adopted to curb COVID-19.

"Our border, by air, land and sea, remains closed until further notice for human traffic. However, given that there are Ghana residents stranded abroad, special dispensation is going to be given for their evacuation back to Ghana, where they will be subjected to the mandatory quarantine and safety protocols."

Even though the President eased some of the restriction he also announced that he has extended the remaining gatherings which range from sports, drinking spots among others.

"I have, by Executive Instrument, provided for these new directions, and extended the suspension of the remaining public gatherings, as set out in E.I. 64 of 15th March, until 31st July. In here, I refer to the suspension of sporting events, nightclubs, cinemas, drinking spots, bars, beaches, festivals, funerals, political rallies, and large religious gatherings such as crusades, pilgrimages and conventions."

He also urged Ghanaians to take all safety precautions serious even though some of the restrictions have now been eased.

"Fellow Ghanaians, it is said that with greater freedom comes greater responsibility. The introduction of this phased opening up of our country means that each and every one of us must continue to remain vigilant, and respect the enhanced hygiene and social distancing protocols that have become part and parcel of our daily routine over the last three (3) months. We cannot afford to let our guard down, and ruin the successes we have chalked over this period.

Yes, there exists the possibility of a potential surge in infections. As a precautionary measure, we have strengthened further our existing national, regional and district response teams, with the support of the security forces, to step up to deal with any eventuality. Over recent weeks, we have learnt from the cases at the fish processing plant in Tema, and in the Obuasi municipality, how to deal with such sudden spikes. We will continue to learn, review and adjust where and when we need to do so. We will only proceed with this staggered opening up of our country when it is safe to do so."

This was announced by President Akufo-Addo in his televised address to the nation on Sunday, May 31, 2020.