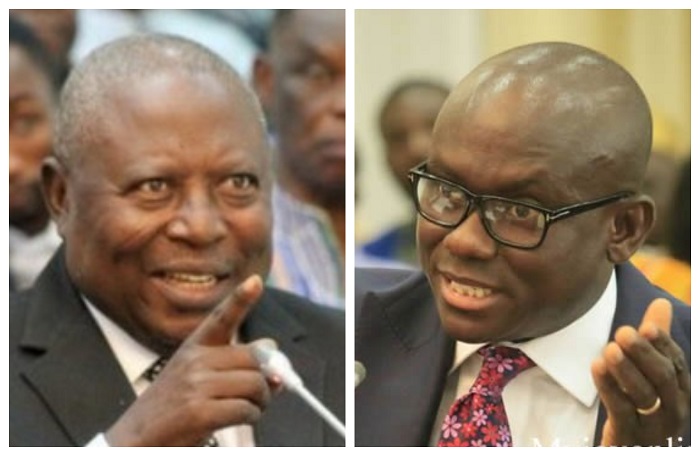 Former Special Prosecutor, Martin Amidu, has descended on Attorney-General, Godfred Dame, in his latest epistle, alleging that the young state attorney is on a campaign to tarnish his integrity in the Double Salary scandal.

Martin Amidu alleged in a statement released on Tuesday, May 25, 2021, that the Attorney General is behind a calculated effort to link his resignation as Special Prosecutor to the failure of the Nana Akufo-Addo led administration to deal with the theft uncovered in a 2018 audit report.

â€œThe effigy of the Attorney-General published alongside the concocted falsehoods of me resigning without prosecuting a case which was never handled by my office during my tenure as the Special Prosecutor demonstrates how shamefully low the hitherto respected ethical Office of the Attorney-General which I had the privilege of serving in for over fourteen years of my career has descended into since 7th January 2021,â€ he states in the latest epistle.

According to him, the â€œirredeemably corrupt Akufo-Addo governmentâ€ masterminded the failure of the state to prosecute the matter and are well aware of the reasons the scandal has fizzled out.

â€œThroughout my tenure as the Special Prosecutor, the respected former Attorney General, Ms. Gloria Akuffo, never referred this case to me for further investigation or prosecution. Any experienced and ethical person who has ever occupied the office of Deputy Minister of Justice under the Constitution knows that the Attorney General never sends a docket to another independent investigatory or prosecutorial agency without a covering letter forwarding the docket with requisite instructions or requests.

â€œMr. Godfred Yeboah Dame, the young and inexperienced Attorney General should know now that he is the Attorney General that there are no records in his office or the Director of Public Prosecutionâ€™s office showing that the Attorney-General, Ms. Gloria Akuffo, old enough to be Mr. Dameâ€™s mother, sent any docket on this case to me as Special Prosecutor to prosecute. No such letter was ever received by me when I was the Special Prosecutor, and no records exists in the Office of the Special Prosecutor of receipt of such a letter or docket from Ms. Gloria Akuffo,â€ he states.

He has alleged that the President used the scandal involving the National Democratic Congress (NDC) Members of Parliament to ensure that his ministerial nominees were approved by the NDC MPs on the Appointments Committee of Parliament.

According to the audit, in 2012, four of the ministers took double salaries and are currently not serving in Parliament, but by 2013 the double-salaried appointees had increased to 22, while in 2014 about 18 were said to be involved

The list showed that the appointees of the erstwhile John Mahama administration received double salaries at least once a month, while others received them monthly throughout the years.

Initially, 25 NDC MPs were said to have been invited by the CID, but the party's representatives in Parliament debunked the allegation.