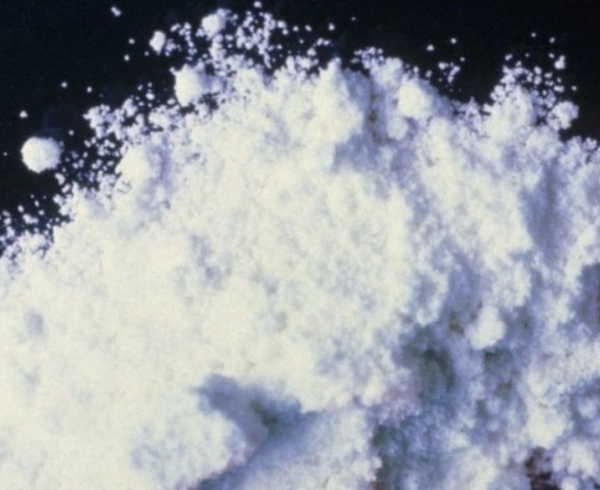 The Ghana Revenue Authority (GRA) Customs Division has begun an investigation into the missing cocaine.

The GRA in a statement signed by Mrs Florence Asante, Assistant Commissioner at its Communication and Public Affairs Directorate, released on June 17, 2020, explained the circumstances believed to have led to the disappearance of the substance and said an investigation has been initiated.

This comes on the back of calls by the Minority in Parliament for an independent Commission of Inquiry to probe the development. 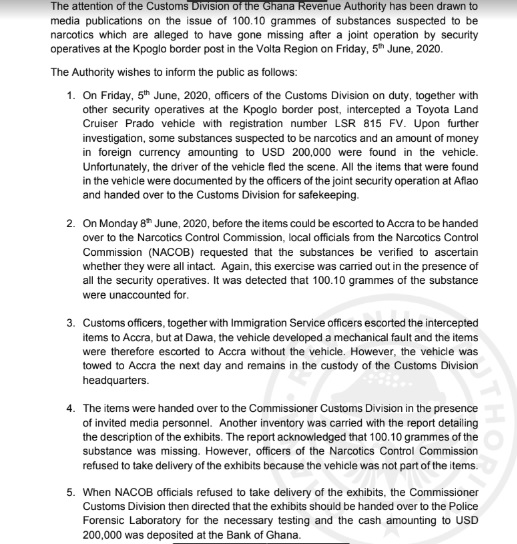 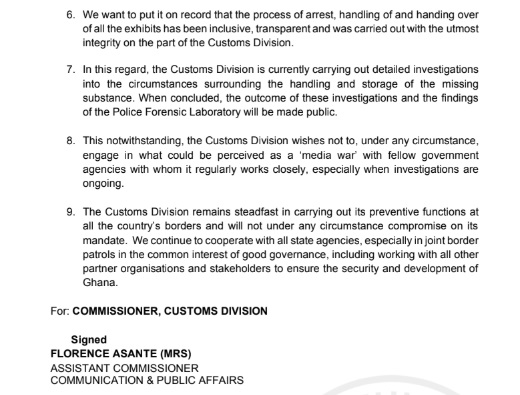 The GRA in the statement further stated that acted with the utmost integrity and transparency in arresting the suspects, handling of and handing over some 100.10 grammes of substances suspected to be narcotics.

Mrs Florence explained that it was through the verification process that “it was detected that 100.10 grammes of the substance were unaccounted for”.

“Customs officers, together with Immigration Service officers escorted the intercepted items to Accra, but at Dawa, the vehicle developed a mechanical fault and the items were therefore escorted to Accra without the vehicle. However, the vehicle was towed to Accra the next day and remains in the custody of the Customs Division headquarters,” she added.

In Accra, Mrs Asante noted, “the items were handed over to the Commissioner Customs Division in the presence of invited media personnel. Another inventory was carried [out] with the report detailing the description of the exhibits.”

The report, she explained, acknowledged that 100.10 grammes of the substance were missing, but “officers of the Narcotics Control Commission [or NACOB] refused to take delivery of the exhibits because the vehicle was not part of the items”.

She narrated further that, “when NACOB officials refused to take delivery of the exhibits, the Commissioner Customs Division then directed that the exhibits should be handed over to the Police Forensic Laboratory for the necessary testing” whilst the accompanying cash of USD 200,000 was deposited at the Bank of Ghana.

The statement indicated that the Customs Division is currently carrying out detailed investigations into the circumstances surrounding the handling and storage of the missing substance, after which findings will be made public.

“This notwithstanding, the Customs Division wishes not to, under any circumstance, engage in what could be perceived as a ‘media war’ with [sister] government agencies with whom it regularly works closely, especially when investigations are ongoing,” the statement said.

On Friday, June 5, officers of the Customs Division on duty, together with other security operatives at the Kpoglo border post, near Aflao intercepted a Toyota Land Cruiser Prado vehicle with registration number LSR 815 FV. Upon further investigation, some substances suspected to be narcotics and USD 200,000 were found in the vehicle.

The driver of the vehicle fled the scene. All the items that were found in the vehicle were documented by the officers of the joint security operation at Aflao and handed over to the Customs Division for safekeeping, according to an earlier statement by the Narcotics Control Commission, now known as NACOB.