I am competent enough to be an IGP - CID Boss 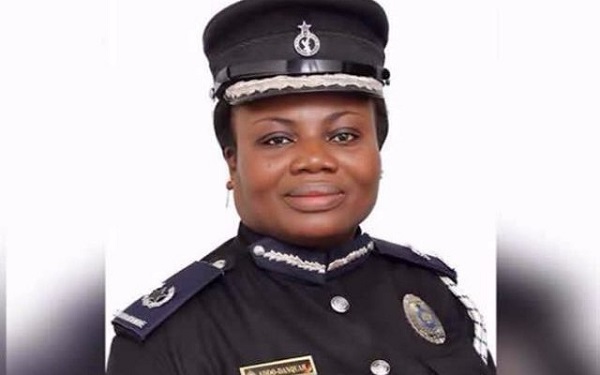 The Director-General of the CID, COP Maame Yaa Tiwaa Addo-Danquah says she is capable of being the IGP
Shares

The Director-General of the CID, COP Maame Yaa Tiwaa Addo-Danquah, says she is competent enough to be Ghana's Inspector General of Police (IGP).

Ms Tiwaa Addo-Danquah has been tipped by some to be the next IGP as the current IGP David Asante Apeatu will be retiring in August.

In an interview on Atinka with Abena Dufie Aboagye on Saturday, May 11, 2019, she said she would gladly accept to be the IGP if appointed by President Akufo-Addo because she is competent enough.

“If the appointing authority feels I am competent for the position, I don’t see why I will turn it down and suggest that it be given to somebody else”.

“What has the person got that I lack?” she queried.

According to her, she has risen through the ranks at the Ghana Police Service over the decades and ready to assume the reins of the police hierarchy. “It’s all about your ability”, she said.

“I laughed when I recently heard that someone has said Ghana is not ready for a female IGP. I guffawed when I heard that because when we went to school, we all had the same training, so, why do some people think women cannot do what men can do? We’ve had two female Chief Justices, we’ve had a female speaker, we have ministers who are females, so, if you say we’re not ready for a female IGP, when are we going to be ready?

“I don’t see why anybody should say women are not ready for the IGP position. Women could even do better than men. Leadership is all about how you manage the people you work with. … Your ability to manage your human resource is what makes you a very good leader.

“The appointing authority will take so many things into consideration. It’s not about your gender.

“I’m more than prepared to be Ghana’s next IGP”, she stressed.

Currently, there is pressure on her to rescue the three kidnapped Takoradi girls. The women wing of the NDC have tasked her to produce the girls in 14 days or resign but she says her outfit is doing everything possible to bring back the girls.