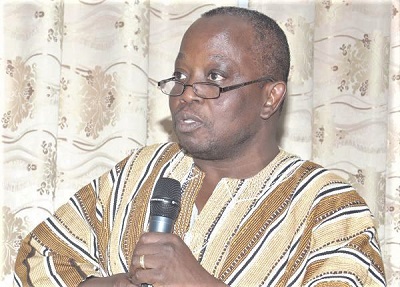 The Auditor-General Daniel Domelevo has hit out at his critics saying that he will not become a pauper if he is removed from office.

Mr Domelevo said he does not care if he is removed from office as some are calling for his immediate removal as he works to uncover corrupt acts in the country.

The Auditor-General has been in the news lately as he faces a suit from the Deputy Agric Minister Kennedy Osei Nyarko over the GETFund report released. The report captured the Minister as a beneficiary.

The National Democratic Congress also claims Mr Domelevo is being witch-hunted because of his investigation against Senior Minister Yaw Osafo Marfo.

Addressing the 3rd regional Auditors Bi-annual Conference in Ho, he urged his colleagues to be courageous in the face of attacks as he likened it to the trial Jesus Christ went through.

"Jesus Christ did good and people still attacked him, I take inspiration from his story and that is what it should be for auditors, just do your good work, you will still be called a bad auditor and that is fine. Be courageous and do your good work, nobody will kill you, the worse that can happen is you lose your job and that is not the end of life. I don't care if I am removed from office, so if today I am removed life doesn't end there, my father has a lot of farms, I will go and farm too".

The fate of Auditor General in a case in which he surcharged the Senior Minister Osafo Marfo will be decided by an Accra High Court on April 1.

The Senior Minister, Yaw Osafo Maafo is in court asking that Mr. Domelovo be punished for failing to respond to his case challenging a $1m surcharge on him.

His lawyers want the court to either impose a prison term or any appropriate sanctions against Mr. Domelovo.

The Auditor Generalâ€™s office had insisted that Yaw Osafo Maafo wrongfully caused $1m to be paid a UK-based consultancy firm, Kroll and Associates, to undertake investigations on behalf of the government.

He has pointed out, there was no valid contract between the UK Company and the Ghana government when Kroll & Associates began work in 2017.Â