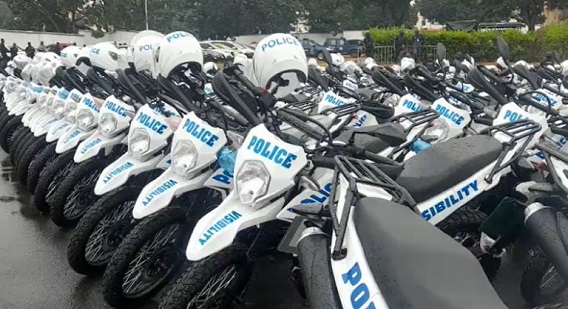 The Inspector-General of Police (IGP) Dr. George Akuffo Dampare has reaffirmed his commitment to making the country the safest in the world.

He made this remark while taking delivery of 1,500 motorcycles from the government.

“What you are going to provide to us today, we’ll go a long way in our tournaments have done and we cannot wait,” Dampare said on Monday.

According to him, the new bikes will be a major boost to better fighting crime.

Presenting the vehicles, President Akufo-Addo indicated that the move forms part of the government’s commitment to retooling the police to achieve its set targets.

He promised to increase the number of bikes to 5,000 by end of next year.

The President subsequently charged the Police to ensure no community is left behind.

Speaking at a public lecture on Policing on August 11, 2022 at the Kwame Nkrumah University of Science and Technology (KNUST), the IGP said the serviceis working to reduce robbery response time to 10 minutes across the country.

According to him, the initiative will be boosted with the deployment of over 2,000 personnel and motorbikes across highways in the country in the coming days.

“We want to reduce robbery and crime response time to 10 minutes across the country. We believe this is possible, and it will be done. When was the last time you heard of robberies on the major highways in the country? The police have men patrolling all those places.”

The IGP also disclosed that the Police Service has scaled up its intelligence operations by committing adequate finance and human resources in the area.