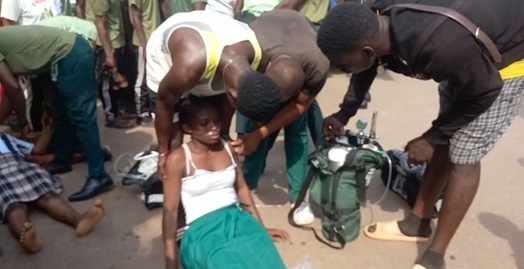 The Parliamentary select committee on Defense and Interior tasked by the Speaker of Parliament to investigate last Monday’s protest at the Islamic Senior High School in Kumasi is expected to present its findings to the plenary tomorrow.

Over 30 students from the school were hospitalised last week after they were met with police action that included the use of tear gas and the firing of warning shots.

The students were protesting the incessant knockdowns of their colleagues and teachers due to the unavailability of speed ramps to check the excessive speeding in front of their school.

The Vice-Chair of the committee and MP for Mfantseman, Ophelia Hayford noted that on “Monday we are meeting as a committee to deliberate on the issues and to put up our report.”

“So hopefully, on Tuesday we will present our report to the Speaker. All things being equal, if we are able to put it together, we will then present it to Parliament as directed by the Speaker,” the MP said to Citi News.

The committee has already expressed concern over the actions of police officers who were deployed to maintain order in the school.

It was also critical of the Urban Roads Directorate for failing to act in providing speed ramps on the main Abrepo -Barekese road after the school wrote several letters to draw attention to the matter.

The Chairman of the Committee, Kennedy Agyapong, said he would have sacked the Urban Roads Director in the Ashanti Region if he had the power to do so.