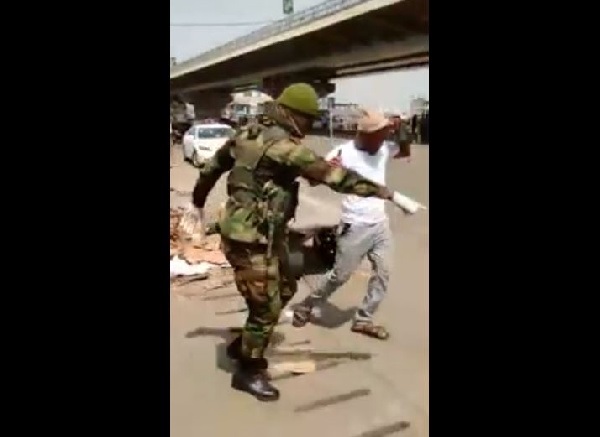 Deputy Defence Minister Maj. Rtd Derrick Oduro says it is better for a soldier to use a little force to stop people from spreading COVID-19.

There have been concerns of military and police officers allegedly brutalizing civilians and that has come to the attention of the authorities.

The clearest incidence occurred at Kasoa where a military officer ordered a civilian to do squatting as punishment for defying the lockdown directives.

"A lot of the video clips on social media are fake, some are good, maybe a soldier brushing the eye of a recalcitrant person with a cane, it is better than to allow them to go around infecting others which will lead to death. If someone prevents you from moving about and you have no essential business go back, we don't endorse brutalities but the citizens must know what to do and what not to do".

Last week there was a shooting incident at Ashaiman market. This was after a man believed to be in his 30s was shot dead after trying to disarm a military officer.

The Ghana Armed Forces (GAF) say they have begun an investigation into the death.

President Akufo-Addo during his address to the nation last Sunday said officers of both the military and police who will be found culpable of using excessive force on citizens to adhere to the lockdown directives will be prosecuted.

The President said even though most of the videos circulating on social media are false, the Inspector General of Police James Oppong Boanuh and the Chief of the Defence Staff Lieutenant General Obed Akwa have begun investigations into alleged brutalities.