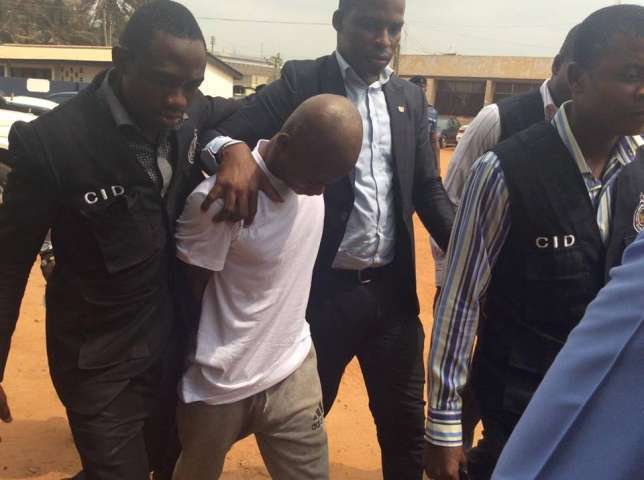 Daniel Asiedu being escorted by the police

Daniel Asiedu, the 20-year-old accused of killing the late Member of Parliament for Abuakwa North, Mr. Joseph Boakye Danquah-Adu, has survived an attempt to poison him in BNI cells, the Accra Magistrate Court hearing has heard.

According to Asiedu, he was given food at 12:00 midnight to eat but he declined.

However, the accused said he could not tell how that story came out on social media. He made the revelation when the court presided over by Mr Stephen Owusu wanted to ascertain the truth about some stories on social media over the alleged food poisoning. When the court demanded to know how he was being treated by security operatives, Asiedu said the situation had gone from bad to worse adding “I am always inside the cells 24 hours each day. I am not allowed to go out of the cells.” Asiedu said though he had complained that he is allergic to food made out of corn, nothing had been done about it and so he had been drinking only water.

The prosecutor, Superintendent of Police Francis Baah, said he was not aware of those developments and assured the court that accused would be well catered for. He also explained that there are no spaces for inmates to walk about. Lawyer for the accused, Mr Augustine Obuor was not present when the matter was called as he had earlier come to the court to wait for his client who was yet to be brought to court. The prosecutor said investigations into the matter are underway. The court therefore ordered the Police to allow the accused to stroll in the corridors of the cells under guard protection for the sake of his health. The matter was adjourned to April 19, GNA reported