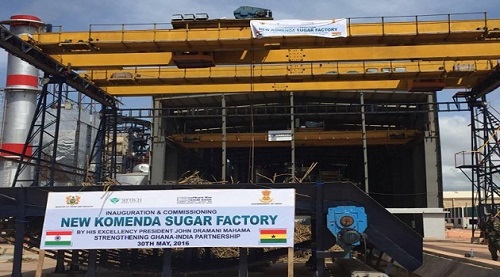 The Minister of Trade and Industry, Alan Kyerematen says the Komenda Sugar Factory is down because of some technical and financial challenges.

The Minister who appeared before Parliament on April 4, 2019, said this was discovered after a technical audit.

Mr Kyerematen who was answering questions tabled by the Member of Parliament (MP) for Komenda Edina Eguafo Abirem (KEEA), Mr Samuel Atta-Mills disclosed that upon the assumption of office, a technical audit was conducted on the facility, which revealed, among other things that the soil condition was not favorable to produce quality sugarcane, saying the government is taking steps to engage a new investor and expects that a decision will be taken by April this year.

â€œA test-run was never completed before the factory was commissioned due to unavailability of sufficient sugarcaneâ€.

According to Mr. Kyerematen, the factory, upon inauguration by the previous government, â€œwas not in a position to produce the required refined white sugar due to the absenceâ€ of some processing component units â€œwhich were not fully installed during the test-runâ€

He said: â€œAbout 35 items had not been installed on commissioning, although they are critical for the production of sulphur-less white sugarâ€.
He added that the land size available for the cultivation of sugarcane is far less than the 6,000 acres required to supply sugarcane to run the factory at full capacity.

Mr. Kyermaten further said, "There has been no out-grower scheme for small-scale farm holders to support a nucleus plantation for the factoryâ€.

The National Democratic Congress (NDC) government some years back contracted a loan of some GHS 35 million for the revamp of the Komenda Sugar Factory.

Mr. Kyerematen, however, revealed that a decision has been taken not to trigger the loan until all the challenges are resolved.