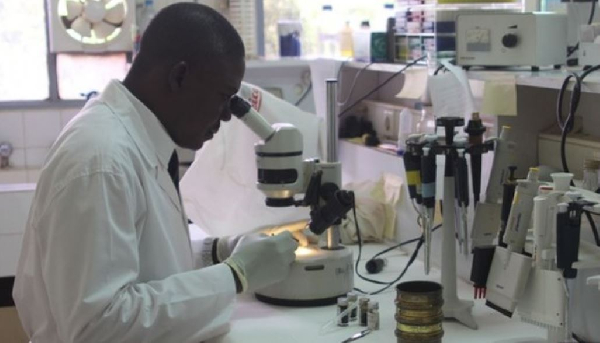 Ghana Association of Medical Laboratory Scientists of the Korle Bu Teaching Hospital (KBTH) chapter last Wednesday started a sit-down strike action to press home their demand for a governing board for their mother association, among others.

Initiated by their mother association, the Ghana Federation of Allied Health Professions, an umbrella body of 18 health professional associations, they withdrew their services indefinitely from Tuesday, May 14, 2019, over what they described as sabotage of their functions by the Ministry of Health.

A visit to the KBTH showed that staff of the medical laboratory had put down their tools to confirm the beginning of a threat issued earlier.

Speaking to the Chapter Chairman, Mr Thomas Dankwah, he said instead of Tuesday, they at Korle-Bu started their action on Wednesday and, therefore, turned away patients or their relatives who came there to give out samples for laboratory diagnosis.

They were not taking any new samples as of the time the Daily Graphic visited the facility around 12 noon.

A few patients and their relatives were spotted hanging around the facility in the hope that they would rescind their decision.

Some were in their wheelchairs while others slept on the benches.

Majority of people who came in taxis or private cars with patients and got to learn of the situation went to private laboratories around the hospital.

A man whose mother was on admission at the hospital said when he learnt of the strike action, he returned his mother’s laboratory request form to the doctor because he did not know how he was going to carry his mother out of the ward in her state to have her laboratory test done at a private facility.

Another woman said she only wanted to know the cost of her laboratory test so that she would have it done later, since she did not have an insurance card, but she was refused.

A retiree, Mr Thomas Quarcoopome, who was sitting at the facility although he was told the staff were on strike, said he was there early in the morning but was not told of any impending strike action.

He said when he reported to the laboratory at around 7 a.m. with the sample of his daughter-in-law who had given birth at the Maternity Unit but was having complications, he was only asked to go and pick a particular form from the unit.

The obviously worried man said he did exactly that but when he came back, he was told he had been given the wrong form.

He again went back only for him to return and be told that the staff were embarking on strike from that very moment.

He said he felt sad because all the people he came with in the morning were served but because he had to go up and down, he missed his opportunity.

Mr Quarcoopome, who is a retired tailor, said he feared for the life of his daughter-in-law and his grandson, as she was unable to breastfeed the baby due to her condition.

He appealed to the government, the management of the KBTH and all those concerned, to as a matter of urgency, help in resolving the issue as lives were at stake.

Another patient said she felt very sad as a lot of people had their lives dependent on the laboratory tests.

She said because the facility received National Health Insurance, most people, including herself, patronised it as they could not afford to pay from their pockets.

The professionals have embarked on the strike action because according to them, the government had for more than two years now failed to institute a board for the federation to regulate the activities of health institutions and professionals.

According to the association the absence of a board for Allied Health Professions had set the grounds for proliferation of quacks and mushrooming of substandard training institutions that were putting the lives of unsuspecting clients and the public at risk.

Another issue was that although they constituted over 50 per cent of clinical health professions in the health sector in Ghana, they have been denied representation on the board of teaching hospitals.