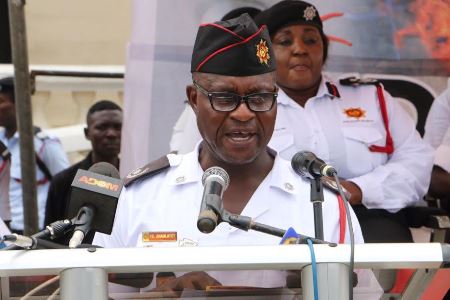 The Ghana National Fire Service (GNFS) has revealed in their initial investigations into the La gas explosion which occurred last week Thursday that, it  was a result of a missing bolts and nuts on a tanker which contained the gas when emptying at Station.

According to reports, the occurrence at the gas station, happened when the tanker emptying the gas into the containers at the station caught fire and lighted the electric cables close to the gas station.

The Fire Service’s initial investigations approve the Chief Executive Officer of the National Petroleum Authority (NPA) Mr. Moses Asaga’s findings that the gas explosion was caused by the 'irresponsible human error' of the workers of the gas tanker.

In an interview with Joy FM, Mr. Asaga said, two bolts which should have stiffened the lid on the gas tanker were missing.

Deputy PRO of the Ghana Fire Service Billy Anaglatey, also said on Joy FM that, their investigation discovered that the explosion was as a result of human error. “various bolts and nuts holding onto to the holding point of the gas tanker itself, the one that had gotten there to discharge gas, [were lost]. That was the spot that exploded…”

He also assured that the (GNFS), is presently conducting additional inquiries “to determine whether those bolts and nuts got out as a result of the pressure build up within the tanker or they got off probably because they were not properly secured.”

The total number of deaths now stands at 11 whereas a little above 36 are in receipt of treatment after sustaining various notches of injury from the explosion.