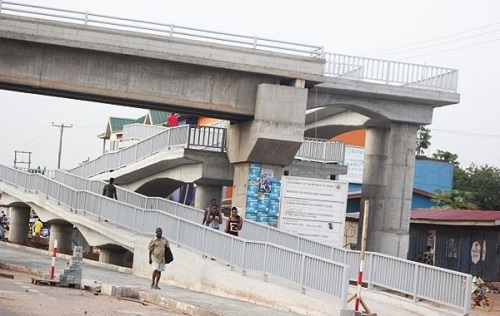 The Greater Accra police command says they will today July 24 begin an exercise on the Madina-Adenta road to sensitise residents to use the newly constructed footbridges on that stretch.

The Police Command also stated that they will arrest and prosecute any pedestrian found crossing the highway without using the footbridges.

Speaking to Joy FM, Police Regional Operation Director, ACP Kwesi Fori said, "We're going to enforce the law, those who will like to endanger drivers and people using the road will be dealt with according to the law and it is going to be an exercise that we will be carrying out in the community, we will be meeting community members, we will be doing enforcement and engaging schools around so that they use the footbridges.."

The footbridges were opened for use by pedestrians in May this year after a series of protest from residents in the area.

The highway recorded a number of knock-downs on the Adentan stretch of the busy road, resulted in the death of some pedestrians, leading to a spontaneous reaction by irate youth in the area who resorted to a number of demonstrations including the blockage of the highway and burning of tyres to draw attention of the government to their plight.

The government eventually re-awarded the contract on the footbridges to new contractors and it was completed in May this year.

"The length of the bridge is international standard, some are considerably longer."

Ernest Hammond explained that the design is to enable disabled people to also access the footbridge.

"We want to make the ramp accessible to all including disabled people and people who might not be fit enough ."

"This was the best design for the situation on the ground, this is the only footbridge we were contracted to do and it was done on time," he added.

Some Ghanaians have complained about the nature of the footbridge, according to them per the design of the bridge it will take an individual about 5 minutes to cross the road.