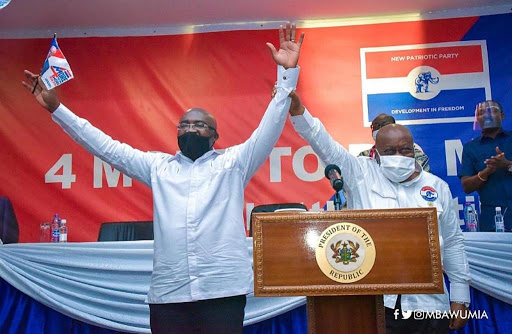 Dr Mahamudu Bawumia says his biggest challenge as a Vice President is working with President Akufo-Addo.

Dr Bawumia says President Akufo-Addo is a workaholic and always wants things to be done quickly to enable him to realize his dream of making Ghana develop.

Speaking on Peace FM's Kokorokoo on August 25, Dr Bawumia says it's not easy working with President Akufo-Addo because he thinks solely of how to improve the lives of Ghanaians and always wants to quickly deliver on his promise.

"As Vice, my biggest challenge is I have a boss who wants things to be done in a hurry. He is a workaholic, he is demanding and very strong. You can't relax, you have to keep going because the government is very large. He wants things to be delivered quickly but I realized that in government things does not move quickly as expected"

Dr Bawumia on the show said the New Patriotic Party (NPP) government has not eliminated hardship in Ghana but has reduced it significantly.

He said what the NPP has done to reduced hardship in Ghana better than what the NDC did when they were in power.

The Vice President recently at a Town Hall Meeting said the NPP g0overnment care about the well being of Ghanaians and will put in more policies and interventions to reduce hardship.

Again at the NPP's manifesto launch last week, they made a number of promises which included paying house rent for some section of Ghanaians, developing Free SHS among others.

The most notable was when the NPP promised the people of Cape Coast that they will build an airport and a harbour.

In summary, he said the New Patriotic Party has achieved 80 percent of promises made during their 3-year stay in government.

He says if they are given another 4 years they will do more to improve the lives of Ghanaians.

Dr Bawumia said Ghanaians should go to the polls and vote for the NPP for another four years because they have a better future for Ghanaians.

“You should vote for President Akufo-Addo and NPP so we provide leadership of service to deliver on our promises, protect our progress and to transform Ghana for all”