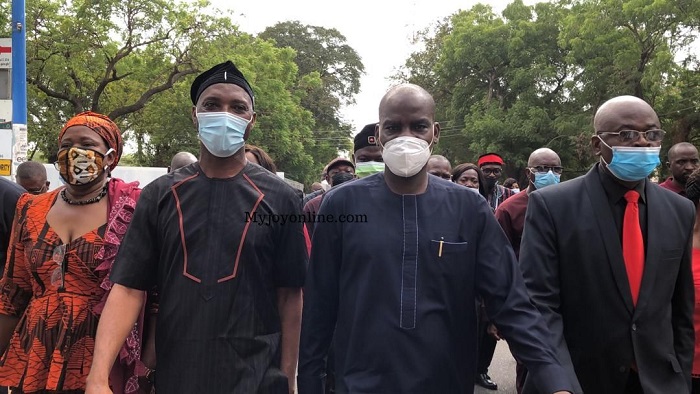 The twenty NDC MPs who were expected to appear before the Accra Circuit Court 11 today January 4, 2021, failed to show up.

This follows a lawsuit against the lawmakers by the State following a decision by the minority caucus to march to the Electoral Commission’s head office in Accra on Tuesday, December 22, 2020.

The Minority caucus led by its leader, Mr. Iddrisu had attempted to storm the headquarters of the EC to present a petition over the results of the 2020 presidential and parliamentary polls.

The police in a statement of offence accused the minority MPs of failing to notify the police before holding a special event contrary to sections 1, 2 and 9 of the Public Order Act.

The police have also charged them with unlawful assembly contrary to section 202 of the Criminal Offences Act.

The statement of offence claims the MPs did unlawfully assemble with a common purpose and conducted themselves in a manner likely to cause persons in the Ridge neighbourhood reasonable fear.

It also accuses them of acting in a manner likely to cause a breach of peace.

“You are hereby commanded in the name of the republic to appear before this court at Accra on the 4th of January 2021,” the summons distributed in the pigeonholes (shelves) of each of the 20 MPs read.

MP for Kumbungu Ras Mubarak had earlier said his minority colleagues will not honour a police summon served on them to appear before the Accra Circuit Court.

He said the court would have to go through the Speaker to get the MPs to appear before it.

“They should follow the Constitution. They should contact the speaker to inform him of what they want to do, the speaker will give directions, invite the parties, and discuss it before any such service can be served on MPs.

“But you don’t send these things to MPs and leak it to the media”, he stressed.