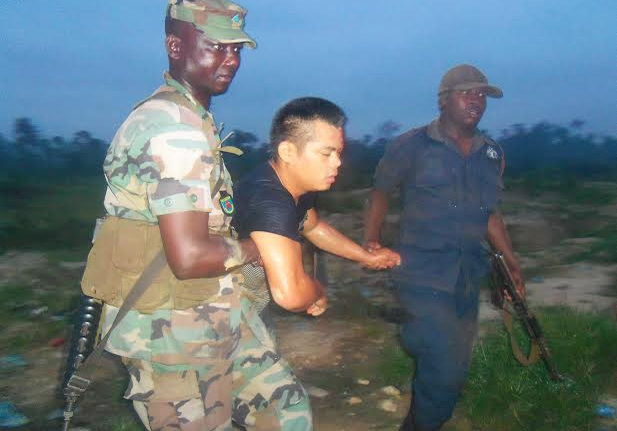 A combined team of Forestry Commission staff and Operation Vanguard task force have arrested nine Chinese and two Ghanaians in the Kweikaru Forest Reserve in the New Abirim district of the Eastern Region.

Also, the two Ghanaians arrested have been identified as Maxwell Anim, 34, and Akare Thompson, 39.

Eastern Regional Manager of the Forestry Commission, Atta Owusu, said the illegal miners degraded over 120 hectares of the forest land, created many trenches posing danger to the forest guards.

He said the Kweikaru Forest Reserve with a size of 1,200 hectares (12.00km square) is under serious threat because since 2010 about 1,500 people with different nationalities have invaded it to mine gold.

Some 58 Chanfai machines, along with mining camps of the illegal miners at Nyafoman stretch of the Kweikaru forest reserve were set ablaze and destroyed.