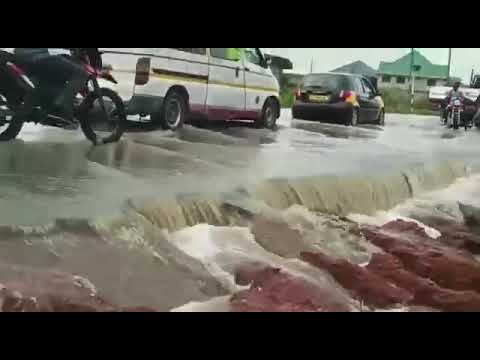 Floods have displaced more than 1000 people at Ashalaja and surrounding areas in the Ga South Municipality of the Greater Accra Region.

This comes after a heavy rainfall over the weekend caused the river Densu to overflow its banks leaving some communities including Ashalaja, Manhean, Obom flooded.

Children could not make it to school on Monday and several workers were also stranded due to the level of the water after the floods.

A joint team of Military and the National Disaster Management Organisation (NADMO) used cannon to rescue the affected persons.

MCE for Ga South Joseph Nyarni revealed that residents have not witnessed such a disaster in the last 6 years.

Meanwhile, Ga South Municipal director Christian Afiadenyo, said they have identified some churches and schools where the victims can reside temporarily

The devastation, he disclosed, has cut off the community from the Amasaman main road, stating several calls placed to the national directorate since morning had yielded no results.