Prof. Atta Mills was mad at me - Anyidoho reveals 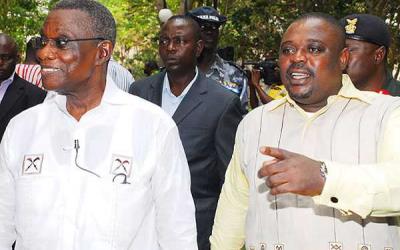 Koku Anyidoho who is the CEO of the Atta-Mills Institute says the late President got furious with him when he decided to expose his son Sam Kofi Atta Mills to the public by involving him in the NDC's campaign in 2008.

Speaking on Asempa FM's Ekosiisen, Anyidoho revealed that Prof Mills did not like the idea and went 'mad' at him for such a decision.

READ ALSO:Â I don't hate Mahama because I was part of the committee that elected him flagbearer - Koku Anyidoho

"There was all this propaganda that he had no child and as the communication manager, I needed to kill that nonsense. So his son Kofi was in town to support him, I couldn't hide him but he had told me not to expose his son but I did it. He called me and he was angry, very mad at me because he had told me not to go on that line, he had his reasons why he didn't want his son to be involved. So I had to go with people to beg him, I went on my knees and he forgave me".

The late President would have been 76 years today if he were alive.

Anyidoho also announced that the Atta-Mills Institute will mark the 8th Anniversary since the death of Late President Prof. John Evans Atta Mills at the Asomdwe Park on July 24, 2020.

The event will be a remembrance service and a wreath-laying ceremony will also be done.