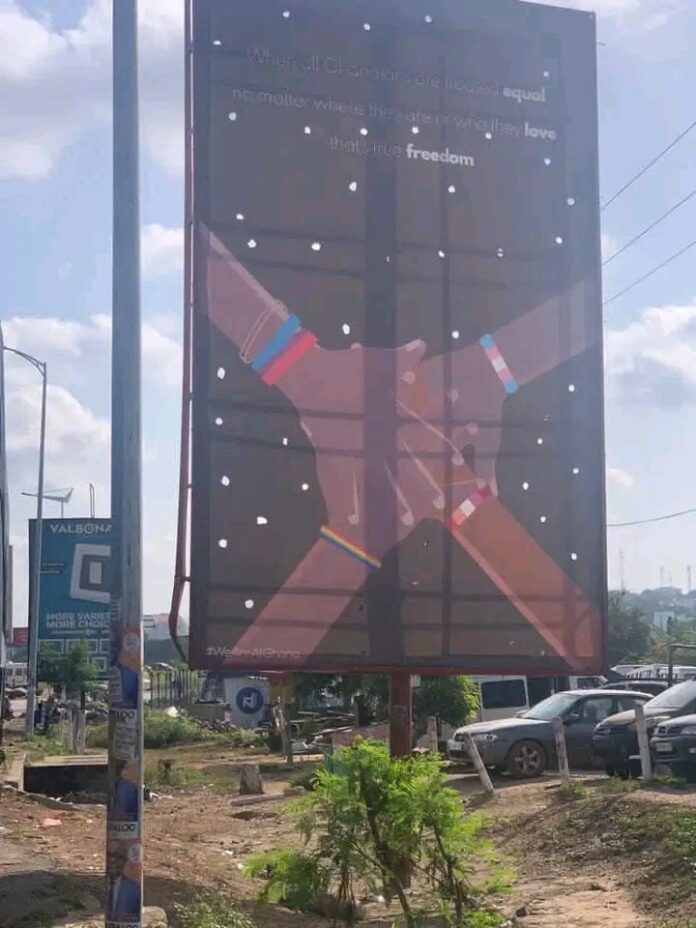 MPs sponsoring the anti-gay bill and a coalition backing them have given the Inspector General of Police and City Authorities 24 hours to pull down billboards promoting activities of LGBTQI+ on some streets of Accra.

The MPs contend the billboards one of which is located on the Accra-Tema Motorway are in violation of Ghana’s laws which criminalize the practice.

Addressing the media at the site of one of such billboards at the Accra Mall, MPs for Ningo-Prampram Sam George and his colleague from South Dayi Rockson-Nelson Dafeamekpor demanded the arrest and prosecution of persons behind the billboards.

They once again took on Chairman for the Constitutional, Legal and Parliamentary Affairs Kwame Anyimadu Antwi alleging he’s been compromised by the LGBTQI+ advocates to frustrate the current bill before his committee, in spite of his denial.

Convenor for the National Coalition for Proper Human Sexual Rights and Family Values Moses Foh Amoaning disclosed activities of the LGBTQI+ members are already endemic in certain second cycle schools and thus must be resisted with alacrity.

He warned the diplomatic community in Ghana against hoisting gay pride flags this year as happened in the past since it’s a violation of Ghana’s laws.

President of the Coalition of Muslim Organizations of Ghana Hajj Abdel-Manan Abdel-Rahman disclosed his organization is profiling all MPs relative to the passage of the anti-gay bill.

He warned a massive campaign will be launched against MPs who are deemed to be frustrating the legislation come 2024.