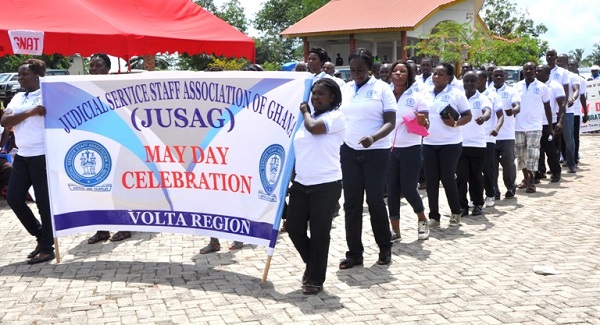 The Judicial Service Staff Association of Ghana (JUSAG) is calling on the government to review their salary or they will embark on a strike action on November 13, 2019.

This was made known in a statement. JUSAG says their current salary was implemented in the year 2017 and to be renewed bi-annually.

A statement by JUSAG stated that “in the year 2017, the Ministry of Finance sought to cancel the payment of rent allowance to our members and after several protests, the Judicial Council, Government and the Association resolved the issue in 2018 and for implementation in the year 2019.”

The statement added that “in 2019, the Association wrote for the salary negotiations on 26th April 2019 and subsequently served a reminder on 29th, July 2019. On 15th October 2019, the Judicial Council mandated to review our salaries and other salary-related matters under the 1992 Constitution set up a committee and considered the proposals of the Association. At the meeting, it was resolved that the decisions of the meeting will be forwarded to the Presidency for approval and same captured in the National Budget for the year 2020.”

“It has, however, come to our attention that the Ministry of Finance has rather slated our salary review for the year 2020 and for implementation in the year 2021. The Association vehemently disagrees with the position taken by Government,”

JUSAG at a meeting held on 31st October 2019 resolved as follows;

1. That all staff of the Judicial Service shall put on red-arm bands and hoist red flags in the courts, nationwide effective Tuesday 5th November 2019.

2. That all staff of the Judicial Service shall embark on an indefinite strike, beginning Wednesday 13th November 2019 until further notice.

3. That staff of the Judicial Service are entreated to observe the above directives without fail.