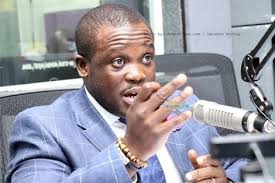 MP for Ningo Prampram, Sam George is considering a contempt action against the Electoral Commission, EC over their alleged City Escape Hotel workshop.

The EC is alleged to have held their training workshop despite a court injunction on their activities.

Sam George on Friday secured an injunction, restraining the Electoral Commission from holding the workshop in his constituency.

The ex-parte injunction, granted by the Tema High Court, is effective from Friday to Monday.

â€œIt is hereby ordered that the respondent and all persons claiming through the respondent (EC) refrain from holding the workshop or conference scheduled to take place at the Escape Hotel Prampram from the 24th of April, 2020,â€ Justice of the High Court, Eugene Nyante Nyadu ruled.

But the EC allegedly went ahead with their workshop.

Sam George in reaction stormed the venue with other members of the NDC. The heavy security presence did not allow them to have access to the hotel premises.

He accused the President of endorsing the actions of the EC.

"The Electoral Commission and I say this without equivocation is doing what they are doing because they have the approval and support of the Jubilee House. President Akufo-Addo is endorsing the illegality and irresponsibility of the EC..."

According to him, he is in talks with his lawyers to consider a contempt action against the EC.

"That is an option available to us, I am having that conversation with my lawyers..."