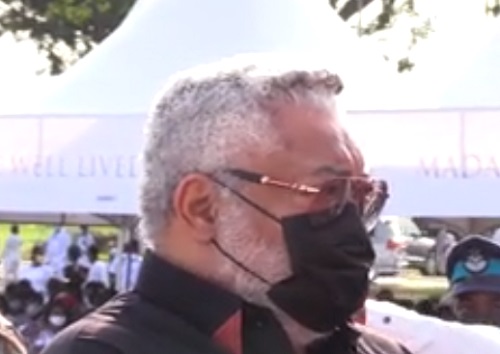 At her final funeral rites at the forecourt of the statehouse, he recounted how strict and an uncompromising disciplinarian his late mother Victoria Agbotui was during her 101 years on earth.

In a tribute read on his behalf by his daughter Zanetor Rawlings, he said, “My mother was tough and determined and never stopped threatening the use of the rod. She was fearless and had the most amazing work ethic.”

“She believed that the devil found use of the idle hand, so kept herself and those around her busy at all times.”

Mr Rawlings said his “very enterprising” mother with “exacting standards” laid the foundation for him to give off his best when he became a pilot in the No. 4 Squadron of the Ghana Air Force.

In his school days at Achimota School, he recounted occasions she came to visit him but met his absence because he had gone to the Achimota Forest to enjoy the tranquillity of nature.

“…as I headed back through the arboretum, I could see her standing in front of Guggisberg House wagging her finger at some poor student who was unfamiliar with her temperament. Invariably she was leaving a warning of some sort behind for me.”

Meanwhile, Madam Victoria Agbotui’s mortal remains will be conveyed to the Keta School Park in the Volta Region for burial service, then to Dzelukope for private internment.

She was once the head of the catering department at the presidency during former president Rawlings’ era.

She left behind four siblings and three children.