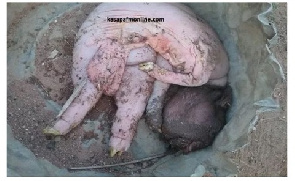 A sheep has given birth to what appears to be a human baby boy at Abotanso No.1, a suburb of Donkorkrom in the Eastern Region.

According to Hon. Yaw Vidzei, the Assemblyman for Donkorkrom Electoral Area, a veterinary officer was called in to assist when they couldn’t attend to the animal which was writhing in pain in labour.

He told Agoo fm how shocked the residents were after the sheep delivered a human-like baby boy with every human feature except its legs which looked like a sheep. However, the newborn couldn’t survive and was immediately buried.

Hon. Vidzei said no traditional rites were performed after the birth of the creature since they couldn’t determine the spiritual implications, adding that, it’s the first time such incident has been recorded in the area.

Meanwhile, speaking to a renowned Spiritualist, Wofa Kissi on the issue, he stated that there could be a spiritual connotation to the incident and said those who witnessed the birth should have performed some customs before burying it.

He, however, disputed it could be a human being who had sexual intercourse with the sheep resulting in the birth of the creature.

Visit primenewsghana.com for the Latest news in Ghana