SONA: Ghana has abundance of food due to Planting for Food and Jobs - Akufo-Addo 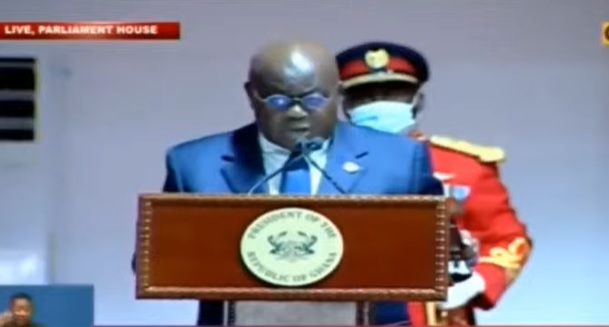 President Akufo-Addo has praised the impact of the Planting for Food and Jobs initiative.

The President who delivered his last State of the Nation Address (SONA) in Parliament today January 5, 2021, said this initiative has led to abundance of food on the market.

He said the government is committed to improving agriculture and he will do so in his second term.

"In 2017 it appeared to some as a joke when we said farmers and agriculture will get the highest priority but we can see the difference it makes when a government treats its farmers with respect and spends resources on agriculture. We have seen a turnaround in agric that has improve living standards of farmers in Ghana. Planting for Food and jobs has led to the transformation of Agric in Ghana. We are able to say that Ghana is now a net exporter of food and we no longer have to import basic food."

Planting for Food and Jobs is a flagship agricultural Campaign of the NPP Government, with five (5) implementation modules. The first module PFJ (Crops) aims to promote food security and immediate availability of selected food crops on the market and also provide jobs. This module was officially launched by Akufo-Addo at Goaso on April 19, 2017 in the then Brong Ahafo Region.