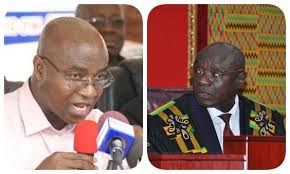 There was a heated argument between Speaker of Parliament, Right Honourable Edward Doe Adjaho and Minority Leader and Member of Parliament for Suame in the Ashanti Region, Osei Kyei-Mensah-Bonsu in parliament today over the consideration of the Right to Information (RTI) Bill.

His interruption received some cheers from the minority side of the house.

However, a charge Kyei-Mensah-Bonsu responded swiftly by registering his side's displeasure with the attempt to rush the passing of the RTI and their willingness to abstain from the entire process.

"Is that the way you want to go? If that is the way the speaker wants to go, with respect, I will tell you that we will not want to be part of any information act", he said among other things.

This effectively threatens the passing of the RTI which is yet to see the light of day after being mooted about 15 years ago.

The majority had wanted to pass the RTI before parliament rises for the Christmas break onFriday but the minority believes there are some clauses in the bill which need to be clarified or amended.

There are currently 24 proposed amendments left to be made to the bill.