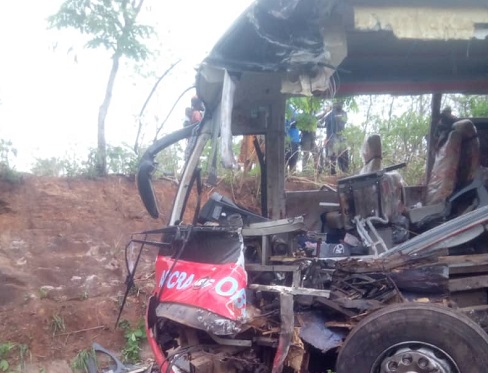 About 30 persons involved in the Techiman-Kintampo gory accident that claimed at least 60 lives are burnt beyond recognition.

According to Citi FM report, 30 of the persons are burnt beyond recognition and 20 has been identified. Confirming the incident, Kintampo South District Commander of the MTTD, DSP Francis Adjei said so far 55 persons have been confirmed dead and others are in the Kintampo South district hospital receiving treatment.

The gory accident happened on the 22nd of March 2019, on the Techiman -Kintampo road after a head-on collision involving two buses. According to media reports, one of the buses caught fire with the other severely damaged.

The Kintampo Divisional Police Commander, ACP Joseph Antwi Gyawu said that the two buses, one with registration number GT 5694 18 and the other GT 3916 17, each had over 50 passengers on board.

Kwame Arhin who is a health official in one of the health facilities where the victims of the accident are being treated confirmed to Starr News that one person is dead and at least 28 victims are receiving treatment.

“We’ve treated about 28 people and one has expired. Seven of them are in critical condition and four have been referred. Most of them have head injuries, lacerations and bruises on the hand, legs, neck and all over,” he said.

The health worker added that most of the passengers may have died on the spot and also the police is yet to confirm the number of casualties.