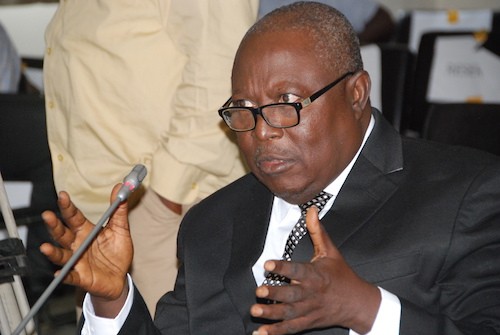 The Executive Director of Alliance for social equity and Public Accountability (ASEPA), Mr Mensah Thompson says there is a deliberate attempt by the Special Prosecutor Martin Amidu not to probe the missing galamsey excavators scandal.

Following the media exposÃ© on the scandal, Mr Thompson petitioned the OSP to investigate the alleged thievery and related corruption offences in connection with the missing excavators.

But in a reply to Mr Mensah, the Special Persecutor, Mr Martin Amidu said, the issues raised in the petition do not merit an investigation by the OSP.

Mr Thompson, however, says he is seeking advice from his lawyers on his next line of action.

"We are very disappointed with the response especially on the basis of which the special prosecutor decided to decline legitimate jurisdiction to investigate this matter. If the evidence we submitted are all conjectured, how is that useful to the CID in their investigation, so there is a deliberate attempt by the Special Prosecutor not to look into the matter, we will talk with our lawyers and know the next move.

Dr Kojo Asante who is a Senior Research Fellow at the Ghana Center for Democratic Development (CDD-Ghana) has criticised the Special Prosecutor (OSP) for turning down the petition of ASEPA and advised them to move to CHRAJ.

"Whether it is the missing excavators or the video that leaked, I think there is sufficient evidence to trigger a probe and I am quite surprised by the judgement from the OSP but regardless if it does not work with the OPS, ASEPA can go to CHRAJ which has a mandate on corruption".

Mr Amidu in his reply said: â€œA review of your letter of complaint, however, has led the office to the conclusion that the facts and conjectures upon which you underpin your complaints do not raise any issues of corruption and corruption-related offences as narrowly defined under section 79 of the Office of Special Prosecutor Act, 2017 (ACT 959) to warrant any investigation by this office,â€ Mr Amidu said.

However, the OSP noted that the facts and matters disclosed in the petition may aid the Police Service that is already investigating the scandal.

The OSP, therefore, referred the petition to the Criminal Investigations Department (CID) of the Ghana Police Service for appropriate actions on the scandal.

â€œThis office, is by a copy of this letter, forwarding a photocopy of your letter to the Criminal Investigation Department of the Police Service for consideration and possible action,â€ Mr Amidu stated.