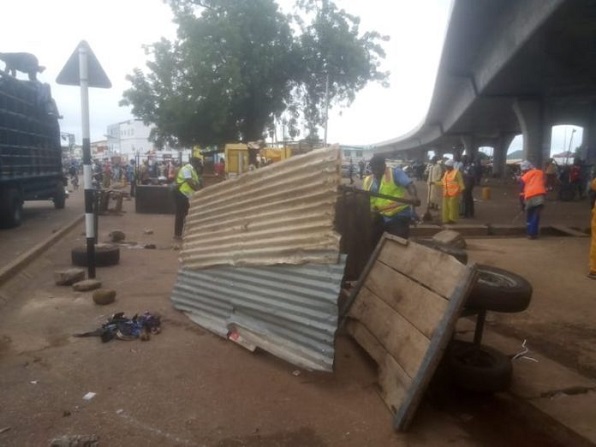 Traders at the central business district (CBD) in Tamale fought back as the Metropolitan Assembly (TaMA) task force performed a decongestion exercise in the market.

The exercise which aimed to clear the CBD and pavements of illegal structures faced contradictions as the traders resisted, claiming they were not given prior notice about the exercise, hence, they were not ready to move.

However, reasoning prevailed as the task force managed to carry out the exercise successfully.

The TaMA Chief Executive Sule Salifu stressed that the exercise is in line with the assembly’s efforts to instill discipline in the CBD to prevent traders from selling and mounting structures at unauthorized areas.

He also indicated that the traders were duly notified to relocate to a satellite market but they failed to heed to the directive, which necessitated the exercise.

“We have made available the Kukuo Market near the Tamale Teaching Hospital to them and we even held a series of engagements with all the hawkers and various stakeholders about the relocation but they failed to comply with the directive.
“The hawkers have taken over all the shoulders of the roads which is very dangerous, so we will do everything within our means to relocate them,” the TaMA Chief Executive stressed.

The exercise led by the TaMA task force had support from the Ghana Police and some other security agencies.

They demolished structures on the shoulders of the road and pavements that obstructed pedestrian movement and the free flow of vehicular traffic.

They also cleared traders who had illegally occupied the pavements along the newly constructed interchange.