University of Energy to be renamed after Dr Busia 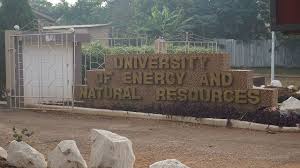 University of Energy to be renamed after Dr Busia
Shares

President Akufo-Addo has announced that the University of Energy and Natural Resources (UENR), in Sunyani, Bono Region is to be named after the late Prime Minister of the Second Republic, Professor Kofi Abrefa Busia.

The President made this known at the 4th Congregation of the University in Sunyani today, August 10, 2019.

"Following the decision taken by the University's Council on August 3, 2018, the university will be named after one of the illustrious sons of the region, Professor K.A Busia after the decision had received Parliamentary approval ", he stated amidst applause.

A representative of the Wenchi Traditional Council, the hometown of the late K.A Busia, Akyeamehene Nana Damoah Koasane Adese-Poku Kofabaye thanked the university and the President for the honour done their son.

It would be recalled that Nana Fremah Busia daughter of Ghana’s former Prime Minister, Kofi Abrefa Busia, said the University of Ghana should be renamed after her father.

She argued that UG should have been renamed after her father due to his contribution to tertiary education.

She said this on the back of some public universities been earmarked to be renamed after some key personalities who played diverse roles in Ghana’s development.