Video : We are suffering from floods, fix our drains now - Residents of Banana-Inn 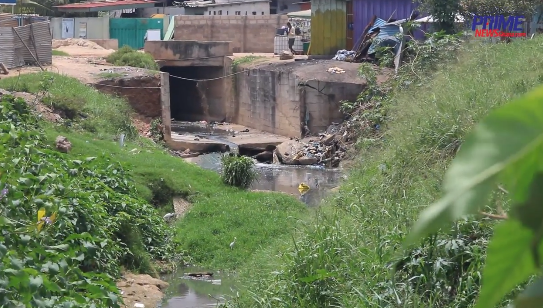 Residents of Banana-Inn, precisely Aboloo Junction a suburb of Accra have lamented about abandoned drains in the area which they say is a major cause of flooding after a heavy downpour.

According to the residents anytime it threatens to rain they become disturbed, also as a result of the heavy rains the abandoned drainage fulls up and water ends up entering their rooms.

Checks done by PrimeNewsGhana indicated that work on the drainage system began in 2009 under the regime of former President John Atta Mills of blessed memory. Addressing the issue of flooding in the area and its environs, the NDC government took an initiative in constructing a drainage system to curb the issue in the vicinity.

Construction of the drainage system began at Soko, an area around the municipality but has since been abandoned which floods anytime it rains.

Some residents also told PrimeNewsGhana the challenges they encounter when there is a heavy downpour and called on the government to fix the drains to avert future occurrences.