We are not against prophecies - IGP 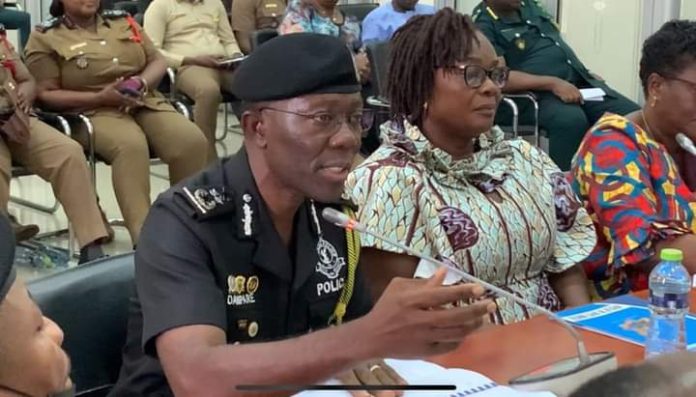 George Akuffo Dampare, the Inspector General of Police (IGP) has said the Police Administration is not against prophecies.

He said as a deep-seated Christian institution that did not joke with Godliness, it would not allow anybody to use God to create confusion in the country, especially when God is not a God of confusion and disorderliness.

Dr Dampare said this when the Ministry of the Interior made an appearance at the hearing of the Public Accounts Committee (PAC) of Parliament.

During proceedings, Dr Isaac Yaw Opoku, a New Patriotic Party (NPP) Member of Parliament for Offinso South, asked Dr Dampare whether there was a ban on prophecies as it was creating fear and panic in the system.

He wanted to know if a law existed to that effect, or the Police Administration was using its powers to minimise prophecies in the country.

“Hon Chair, this is a very difficult question for me but as a Christian and somebody who also believes in prophecies…. and as a son of God, God will always have engagement with you and tell you things to happen in the future if only you are ready to listen,” Dr Dampare said.

“But all the issues that we have been putting across as an institution is to prove to everybody that we are not against prophecies. We are talking about the communication of such prophecies that will end up creating fear and panic in our society, which is unwarranted.”

The IGP bemoaned the manner in which those announcements were made but not against prophecies per se.
“When God speaks to you carry the message in a manner that will not affect the sanity of the country,” he said.

…”Hon Chair, it’s a simple matter….and truly a very simple matter. Hon Chair, before I became IGP, nobody prophesied about me, now that I’m IGP, everybody is prophesying about me, and I have no problem with it because I am a public figure. But why should it be such that if God has revealed something to you about me and you want to share with me, you have to make it showmanship and tell the whole world about it.”

“If you receive prophetic message that I’m about to die, which, of course, I’m not afraid of because death is inevitable,…because if you don’t want to die, then you should not allow yourself to be born. Once I’ve been born I’ll die one day. So, for death, the only thing I can do is to probably become a friend with it so that it can treat me with leniency,” he said.

Dr Dampare, therefore, urged prophets to have a way of churning out prophecies that would not cause fear and panic to families and the country.

“We don’t know the language God speaks and who interprets for Him, but the point is that if God speaks to you and you go out there ask the same God to give you guidance as to how it should be communicated in order not to negatively affect lives,” he urged.

PAC commenced sittings on Monday, January 16, 2023, to examine the Auditor General’s Report on public accounts of the Government for the year 2020 and scrutinise the accounts of the Ministries, Departments, and Agencies per the recommendations of the Report.

The accounts of public boards, corporations, and other statutory institutions would also be considered.
Proceedings of the almost two-week sitting are expected to be concluded on Friday, January 27, according to a statement issued by the Public Affairs Directorate of Parliament and copied to the Ghana News Agency in Accra.