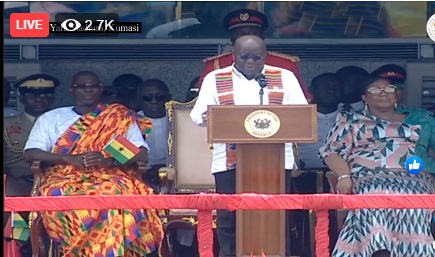 President Akufo-Addo has indicated that government is changing the educational curricula across the country, to meet needs of the modern economy.

According to the President, this is aimed at preparing Ghanaian students to equally compete on a global scale.

With this, the President said great things are happening to Ghana in its 4th Republic emphasizing that, the country is making progress.

The President made this known at the 63rd Independence celebration hosted at the Baba Yara sports stadium in the Ashanti Region, Kumasi today March 6 2020.

The President outlined achievements the country has chalked in its 63rd years indicating ''Ghana is making progress''.

President Akufo-Addo stated that: "There are more children in SHS now then we have ever had. We are changing the curricula and focus in education to meet the needs of the modern economy we are making progress. The supply of electricity in the country has reached 8.5% in the country, we are making progress. Previously,19% of our people did not have access to potable water but 81% of people in the country presently has access to safe water. The supply of electricity has reached 85% of the country.''

The President in his address stated that no child has died from measles for the past 17 years in Ghana. Adding measles used to be the leading killer of children aged 5 in the country.

The President further stated that:'' no longer do mothers have to sell their most expensive fabrics and jewellery and fathers go to money lenders to be able to see their children through Senior High School. Today, senior high school education is free for every child.

READ ALSO:Â Let's all work towards a peaceful Ghana - Akufo-Addo to Ghanaians

Â Again, the President in his address mentioned that most Ghanaians are embracing the need to preserve the beauty of our environment and water bodies therefore, we are making progress.

The President also charged the citizenry to live in peace and harmony to promote development in the country.

The Ceremony was attended by dignitaries such asÂ Prime Minister of Trinidad and Tobago, Keith Rowley, Overlord of the Asante Kingdom, Otumfuo Osei Tutu, Former President, John Agyekum Kufour amongst others.