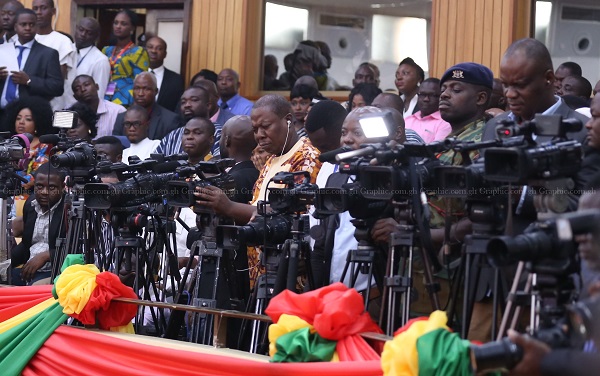 As part of the World Press Freedom Day, Members of Parliament have urged Ghanaian media owners to improve the working conditions of their employees.

Ghana joined the rest of the World to mark the day and Samuel Okudzeto Ablakwa MP for North Tongu and MP for Twifo Atti-Morkwa, Abraham Odoom, contributing on the floor of parliament said journalists in the country are vulnerable due to the poor conditions of service and called on their employers to improve their working conditions.

The Minority Leader in Parliament, Mr Haruna Iddrisu, in a statement, congratulated journalists for their contribution toward nation-building. He also described as worrying, the current world press freedom index in which Ghana dropped from 23 to 27.

Contributing to the topic, Deputy Communication Minister, Mr George Andah assured the media of the government's commitment toward ensuring their safety and urged them to work without fear or favour.

This year’s World Press Freedom Day is being marked in Ethiopia.

Recently there have been certian disturbing development in the Ghanaian media landscape, Ghana's ranking on the world press freedom index has dropped.

This year, Tiger eye PI staff, Ahmed Hussein Suale was assassinated whilst journalists with the New Times Corporation were also physically assaulted by some police officers. These incidents, according to media activists require media owners and state agencies to ensure journalists are safe on the job as the world marks press freedom day today.

World Freedom Day is held every year to celebrate the fundamental principles of press freedom, evaluate press freedom around the world, to defend the media from attacks and to pay tribute to journalists who have lost their lives in the exercise of their profession.

Marcus Rashford will receive an honorary doctorate from the University of…

US murderer Daniel Lewis Lee has been put to death, hours after the Supreme…