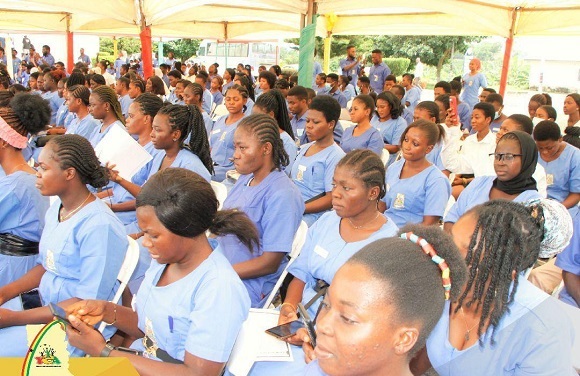 Over 6000 youth passed out on Friday, October 14, 2022 under the Youth Employment Agency’s Community Health Worker (CHW) module across the 16 regions of Ghana.

For the very first time, the beneficiaries are going to receive a monthly allowance of GHC500, an improvement on the GHC250 that was received by their previous cohorts.

CHW is a module of the YEA that is focusing on the selection of young indigenes of the various communities, trained and posted to work in selected districts, sub-districts and communities across the country to assist community health officers, nurses and midwives in their health service delivery, particularly in the area of health promotion, disease surveillance and disease prevention.

The current CHW module, in partnership with the Ghana Health Service, is an improved version of previous ones with a new focus of improving the impact of beneficiaries in their communities, improve the wellbeing of citizens, and most importantly contribute immensely towards supporting the beneficiaries to identify their career paths.

Speaking at the national passing out ceremony in the Eastern Region on Friday, the CEO of YEA, Kofi Baah Agyepong, announced that for the first time, formal arrangements have been made with the Ministry of Health and Ghana Health Service to give a special dispensation to the beneficiaries during admissions into nursing training schools, premised on the requisite field and practical knowledge.

He eulogised President Nana Addo Dankwa Akufo-Addo for his commitment to youth employment and development, and further dedication to the sustainable development goals. He said even in the face of severe economic hardships, both locally and globally, funds to run the CHW and other modules have been made available by the government to ensure that the youth have jobs.

The visibly elated beneficiaries praised President Akufo-Addo for the opportunity, especially the 100% increment of their allowance.

Agyepong admonished the beneficiaries nationwide to be very hardworking and diligent in their work as the agency will not countenance truancy, laziness and misbehaviour during their engagement period.

Agyepong also hinted that over 15,000 personnel will also be recruited in the YEA’s Community Protection Assistants Module in the coming months.

The Eastern Regional Minister, Seth Kwame Acheampong, assisted by some MCEs praised the government for the numerous interventions geared towards creating more opportunities and alleviation or reducing the impact of the current global economic crises on Ghanaians, especially the youth.

The national event took place in the Eastern Region, hosted by the Eastern Regional Director of the Youth Employment Agency Jerry Osei-Poku and his team, whilst all other regions held same ceremonies to pass out their beneficiaries.