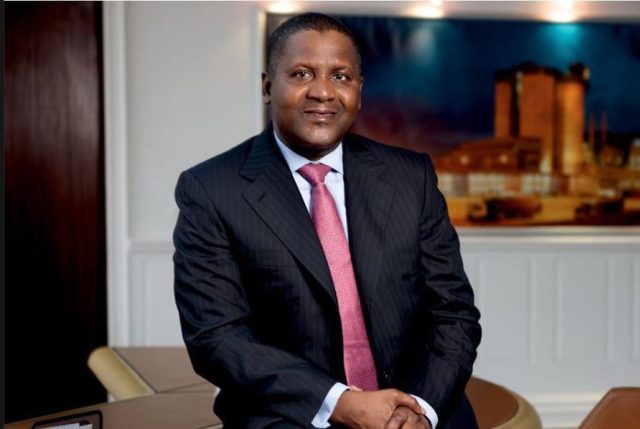 Nigeria’s Aliko Dangote retained his place as the richest man in Africa on the newly released Forbes’ list of African billionaires.

He, however, lost almost $2bn compared to his last year’s worth. Dangote’s estimated $10.3 billion net worth is nearly $2 billion less than a year ago.

The continent’s second richest is Mike Adenuga, also of Nigeria, worth an estimated $9.2 billion.

His net worth has climbed dramatically from $5.3 billion in January 2018 as a result of more detailed information provided by him about his assets.

In a per country ranking, Egypt and South Africa are tied with five billionaires each, followed by Nigeria with four and Morocco with two.

Nigerian cement mogul Abdulsamad Rabiu, who runs and owns the BUA Group, returns to the list for the first time since 2015.

He merged his Kalambaina Cement firm into publicly traded Cement Company of Northern Nigeria, which he controlled, in late 2018. Rabiu now owns 97% of the list entity.

Nigeria’s Alakija owns a stake in one of the most productive oil fields in Nigeria, currently operated by Chevron. Her net worth dropped due a decline in the value of the oil field, in part because its production has leveled off.

Altogether the 20 African tycoons are worth $68.7 billion, down from $75.4 billion for last year’s list. However, the average net worth for each list member this year has climbed to $3.4 billion from $3.3 billion in early 2018.

Here are the richest Africa’s Billionaires