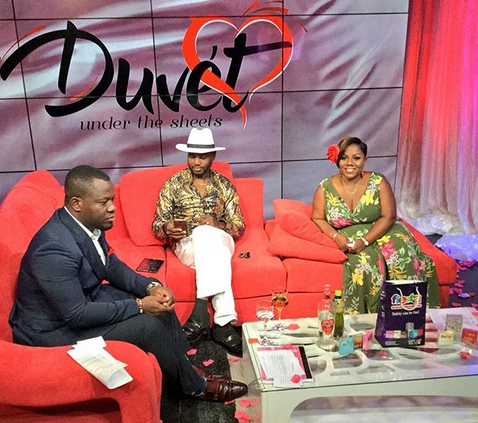 Issues of sex and love continue to play an integral role in making affairs of the heart a pleasant encounter to those who are attracted and/or attached to each other.

As a consequence, people strive to get informed about some of the basic principles of sustaining their intimate relationships.

However, most individuals still find themselves in a maze of life in this regard, making it very difficult for them to achieve the desired aim in their respective tie-ins. This has been pointed out by many experts,  among others, as a result of their inability to experience quality productions which hosts trustworthy resource persons to guide them in this vein.

It is against this backdrop that the need to pass these key information to such persons have become a matter of necessity.

In Ghana, GhOne TV has set out to champion the cause of making relationships better with the introduction of the sex-talk show dubbed DUVET. It is a flagship TV program which brings to the fore, pertinent issues of the intimate relationship between people which mainly happens "under the sheets".

Originally created as a special content for the station's Valentine's Day commemoration in February 2018, 'DUVET' has now become a weekly must-watch TV show for people who are bent on building a healthy love life in their respective amorous entanglement.

This comes after a positive feedback from viewers who also felt 'DUVET' was off the usual way of sex-talk shows in the country while mentioning that it is the right content they've yearned for in years, so far as matters of such nature are concerned.

With a warmth and symbolic set design, the adult talk show has been created to mainly educate, entertain and inform cherished viewers about their sexual lives, love, relationship matters as well as their sexuality.

Over the couple of weeks, topics like the benefits of sex, foreplay before love-making, sex and religion, orgasm, sex techniques and many other interesting relationship subject matters have been dealt with.

Since its inception, DUVET has been graced by many distinguished resource persons who have educated viewers on some of the key points in building great relationships.