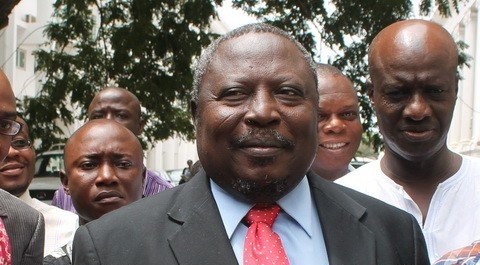 Mr. Martin. A. B. K. Amidu has won the respect of many Ghanaians for his intransigent fight against wanton dissipation of national purse by his own party: National Democratic Congress (NDC) apparatchiks.

No wonder that he has gained the sobriquet: “citizen vigilante.” Since Nana AddoDankwaAkufuAddo (

Since Nana AddoDankwaAkufuAddo (NADAA) led New Patriotic Party’s (NPP) victory in the presidential and parliamentary elections on December 7, 2016, many Ghanaians have suggested the inclusion of Mr Amidu in the incoming administration. The latest individual to add his voice to the call is no mean person like Dr Kwame Addo Kufuor.

Both Dr Kwame Addo Kufuor and NADAA are politicians of insightful and impressive erudition. Nevertheless, this call will somewhat not inure to the benefit of NPP as a political organisation. My main reason is what I termed as “integrity conflict”.

Mr Amidu is very credible and honest when it comes to protecting national treasury and fighting against kleptocracy. He deserves a national honour. However, can his loyalty within an organisation be trusted? How well could he bridge his NDC political ideology with that of NPP?  Mr Amidu was a senior member of NDC. He became the vice presidential candidate for the late President Mills, then candidate Mills in the run-up to the 2000 presidential election. After, NDC’s pyrrhic victory in the 2008 election, the late president Mills appointed him as an interior minister. He was later reshuffled as an attorney general and minister of justice. So what prevented Mr Amidu from resolving his differences within NDC as an organisation?

This means that Mr Amidu did not raise the bar of competence when it comes to organisational integrity. His attacks on NDC government benefitted NPP. If a second wife teases and jubilates while the husband is physically assaulting the first wife, she must be prepared for the same degree of assault as soon as a third wife comes in. From my novice commonsensical thoughts, Mr. Amidu is bereft of loyalty relative to organisational integrity. Every successful government is a product of a political party. Political parties thrive on secrecy. Adding Mr Amidu to NADAA’s cabinet could either be useful or politically suicidal.

Industrial/organisational (I/O) psychologists underscore the significance of integrity or honesty test, especially during job interviews and employees selection. An integrity test is used to determine whether an employee will engage in counter-productive or dishonest work-related behaviours such as cheating, stealing and sabotage. There are two main types of integrity test namely: overt integrity test ( measurement of attitude towards theft, and through an admission of self-report and actual theft behavior ) and the personality type integrity test (an attempt to measure personality traits believed to predict counter-productive conducts such as risk taking, emotional instability, psychological misgivings, dishonesty and irresponsibility).

No organisation in the world will hire somebody who breaches the policy of the company regarding confidentiality. Notwithstanding the fact that Mr. Amidu’s revelation on corruption within NDC is healthy for national development, his modus operandi is pernicious to organisational development. Thus, the call to include Mr. Amidu in Nana Addo’s government is a necessary evil. His inclusion in the cabinet could empower and motivate other members to conduct their affairs in a very responsible manner. It could also compromise the principle of confidentiality within NPP as a political party. Besides, it could create fear within the cabinet ministers and this could slow down development.

I think the call to include Mr. Amidu in the incoming administration is in order as it could help the image of the government. However, it could frustrate NPP as a political party. Mr. Amidu needs a national honor rather than political position due to ideological differences between NDC and NPP as well as the aforementioned integrity conflict (national integrity versus organizational integrity). Psychologically, giving him a political appointment is a form of bribery to influence his role as a citizen vigilante.

Fellow countrymen, I think the incoming NPP government can reward him by adding him to the beneficiaries of the article 71 office holders’ emoluments. This is because he lost his job out of patriotic zeal. We can recognize his patriotism for Ghana by appreciating and loving his effort.“We can conceive of a future without high rise. But a humanity without music and love is not just inconceivable: It is impossible” (George Leonard). God Bless Our Homeland Ghana.