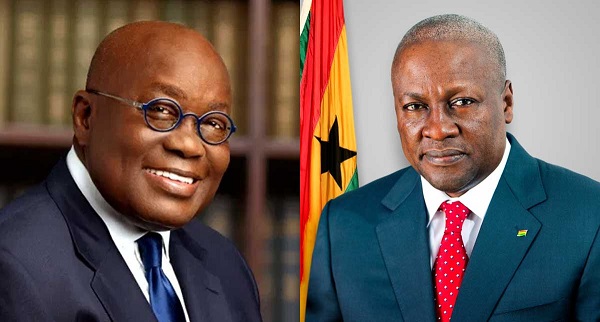 The Economist Intelligence Unit (EIU) in their latest reports says the 2020 general elections could be a close one if only the National Democratic Congress (NDC) presents a coherent opposition to the New Patriotic Party (NPP).

The EIU said even though the NPP would win, the NDC can give them a stiff opposition should they hold them to account for their unfulfilled campaign promises.

This is not the first time the EIU has predicted a win for the NPP but said they need to tread cautiously.

According to EIU, former President John Mahama and the NDC will struggle to convince Ghanaians that they are better at managing the economy than the ruling NPP.

â€œThe next national elections are due in December 2020. The Economist Intelligence Unit expects the NPP to retain power, as the party is seen as a better custodian of the economy than the opposition NDC,â€ the April 2020 edition of the report added.

The report stressed: â€œThe campaign for the 2016 election was dominated by public concerns over a faltering economy, which many Ghanaians still associate with Mr Mahama. Ahead of this election, the NPP has focused on infrastructure development (such as improving internet and electricity access, as well as roads, in rural areas) and outlined ambitious growth plans for cash-crop yields, which would bolster rural incomes. Despite the uncertainties posed by the pandemic, The Economist Intelligence Unit believes that it will be difficult for the NDC under Mr Mahama to portray itself as the better custodian of Ghanaâ€™s economy.â€

â€œIf the NDC can present a coherent challenge and hold the NPP to account on its unfulfilled campaign promisesâ€”such as faster progress on infrastructure developmentâ€”the elections could be closely contestedâ€.

Ghana goes to the polls on December 7. President Akufo-Addo will once again lead the NPP against former President John Mahama of the NDC.