568 vehicles provided to the Police, 320 housing units being built – Akufo-Addo 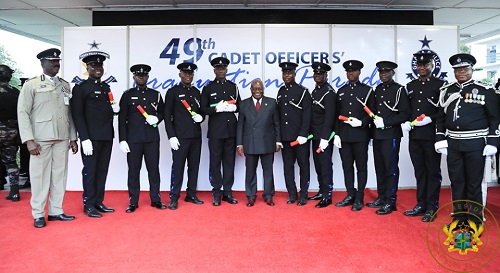 President Akufo-Addo, says Government, in recognition of the difficulties and dangers confronting police personnel in the discharge of their duties, is committed to resourcing the Police Service, in terms of provision of adequate personnel and logistics, to enable them deliver on their core mandate.

According to President Akufo-Addo, “despite budgetary constraints, the Akufo-Addo Government has, in two and half years in office, provided 568 vehicles, including 15 operational buses to the Service, a feat unprecedented in the history of the Service.”

With many more vehicles expected to arrive in the country in the next few months, the President noted that when he took office in January 2017, the Service had a total of 492 serviceable cars.

President Akufo-Addo made this known on Friday, 13th September, 2019, when he addressed the graduation ceremony of the 49th Cadet Officers Course of the Ghana Police Service.

READ ALSO : Fight against corruption :  Akufo-Addo is a victim of his own high standard - Kofi Bentil

Additionally, the President noted that 320 housing units are being constructed at National Police Training School to reduce the accommodation deficits of the Service.

“Modern communication equipment, and 4,500 fragmentation jackets have been procured and delivered to the Service to protect officers, and ensure effective policing,” he said.

President Akufo-Addo continued, “Government has also secured three (3) helicopters for the Service, with the construction of hangars at the National Police Training School almost nearing completion. I am happy to inform you that six (6) officers are currently undergoing training in South Africa to become pilots for the helicopters, and serve as the Air Wing of the Police Service.”

Twenty (20) horses, the President said, have also been procured to assist the Police in riot and crowd control, with a Canine (K9) Unit, made up of thirty (30) dogs, also in the offing.

The recent establishment of the Police Intelligence Directorate, he said, is ensuring that police operations and investigations are increasingly being carried out on the basis of intelligence.

“The Criminal Investigations Department will, by the end of the year, be equipped with a digital forensics’ laboratory, and, for the first time in the history of the Department, crime officers are given a monthly allowance to support their investigations. We are retooling the CID Forensic Science lab; the CID building has also now become disability friendly; and there is continuous training of CID officers,” the President said.

Touching on recruitment of new police personnel, President Akufo-Addo noted that Government has given approval for the recruitment of four thousand (4,000) personnel to augment the strength of the Police Service.

He revealed that 961 of these recruits passed out between 22nd and 31st July this year, in various Police Training Schools throughout the country.

These measures, according to the President, have been put in place by Government to reform the Police Service, and make it fit for purpose.

The recent attacks on some police officers, which have resulted in their deaths, he said, must no longer be allowed to continue.

“I condemn these attacks in no uncertain terms, and I assure the Police Service and the general public that, in so far as we are a nation governed under the rule of law, such criminal acts will not go unpunished. No one deserves to be killed under any criminal or extra-judicial circumstance,” President Akufo-Addo explained.

He continued, “Personnel of the Police Service should not be seen as enemies, but rather partners in the fight against crime. I am happy to note that the Police Administration has, in all these cases, acted promptly, and arrested the perpetrators, who are now facing trial. The Ghanaian people are expectant that such rapid arrests will also be carried out when the victims are ordinary citizens.”

In the same vein, the President was expectant that, any police officer who breaks the law, and abuses the freedoms and human rights of any member of society must not be spared, and should be brought to face the full rigours of the law.

Government, the President reiterated, is determined to help create a security service, including the Police Service, that is professional and efficient in the discharge of its duties.

“Promotions within the service have to be based on merit, and not on political affiliation. The political affiliations of serving officers should manifest themselves only in the polling booth on election day. Once they don the uniform, the population and I expect them to carry out their duties impartially, without any political coloration. That is the basis on which I have proceeded since I assumed office on 7th January, 2017,” he added.

President Akufo-Addo told the gathering that the political leanings of any of the commanding officers of the various security agencies, including the Police Service, are not his concern.

“My concern is their ability to deliver. That is the best way we can build a credible security and police system,” the President stressed.