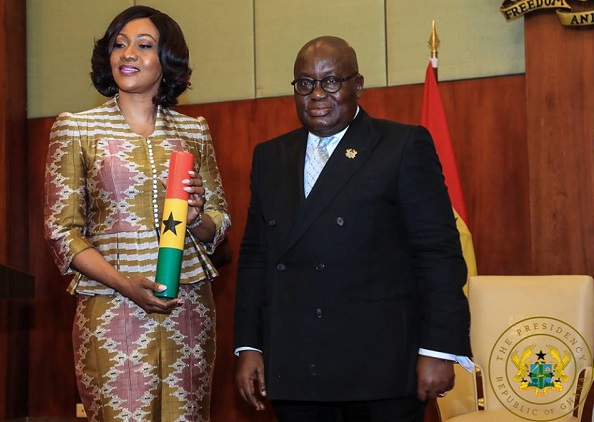 President Akufo-Addo says he does not need the Electoral Commission's support to win the 2020 election.

The president, who won election 2016 as an opposition candidate was speaking, when the EC chairperson, Mrs Jean Mensah paid him a courtesy call as part of the EC's stakeholder consultation, on Thursday September 12, 2019. He said:

On her part, the EC chair, Mrs Jean Mensah urged smaller political parties to form mergers, while she stated the consultative process the EC has been embarking on to ensure parties are brought up to speed in accordance to legal requirements, and in compliance with the principle of accountability. She also lamented the lack of clarity in laws governing political parties, which hinders the EC from carrying out sanctions when necessary. The EC chair said:

“We are trying to develop a common template and to streamline the activities. But more importantly we’ve also undertaken institutional visits to the parties. And the whole idea is to find out which parties really exist, and which parties do not exist. The report has been prepared. The commission is yet to sit on it, and take a decision. The difficulty we have is that our laws are very vague. And if you look at the provision that requires parties to have at least two-thirds of offices in the districts, there are no sanctions when they do not have those offices. The only sanctions we find is that parties should be filing their returns. And unfortunately since 1992, you’ve only had one year when a party has filed its returns. So our hands are sort of tied. But at the same time as a commission, 26 years in the life of the country’s democracy we’ve come very far. And some parties have been in existence for 26 years. We know that our predecessors were of the view that they should be given an opportunity, we should nurture them. But we believe 26 years is a long time. And so as a commission we are going to look at the report closely and basically meet with those who have not performed, those which do not exist, and try to encourage them to merge with other parties. So by the end of the year the commission will come up with its own report, on the decision that it has taken”

The EC is currently embarking on a broad stakeholder consultation, and has met with former presidents H.E. J.J. Rawlings, H.E. J.A. Kufour, and H.E. John Mahama, as well as other significant stakeholders in the process,  in the build up to Election 2020.

The EC is set to meet the former head of Nigeria's electoral commission, who is on a visit to Ghana.