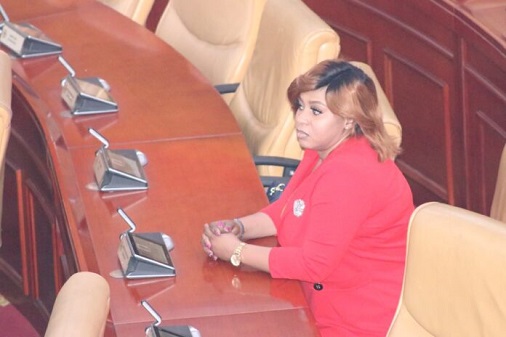 Member of Parliament for Dome-Kwabenya, Sarah Adwoa Safo has resumed full parliamentary duties following her return to the House Friday.

The lawmaker said she’s back as an MP to continue her duties.

She claimed she received a warm welcome from colleagues and friends in the House upon her return and hoped the subsequent weeks would be good.

“It feels good to be back,” Adwoa Safo said in an interaction with parliamentary reporters.

The former Deputy Majority Leader requested for leave of absence in 2021 to attend to personal issues but in a statement dated Wednesday, October 6, 2021, signed and issued by the Director of Communications at the Presidency, Mr Eugene Arhin, it was explained that Adwoa Safo’s leave was to have ended August 31, 2021, but was further extended indefinitely.

President Akufo-Addo on July 28, 2022 sacked the MP from her role as Minister for Gender, Children and Social protection.

The Speake gave clearance for a report from the Privileges Committee on the three absentee Members of Parliament to be tabled and discussed in the House.

Mr. Bagbin dismissed attempts for the Speaker to declare some of the seats vacant without a formal debate of the Privileges Committee’s report.

In his ruling, Rt. Hon. Alban Bagbin said, “the preliminary objection for the admissibility of the report is hereby dismissed in "limine.”

“It is for the House that will go through it because the mandate given to an MP, representation is so crucial that it cannot be left to the subjective view of any person or group of people but the whole house.”