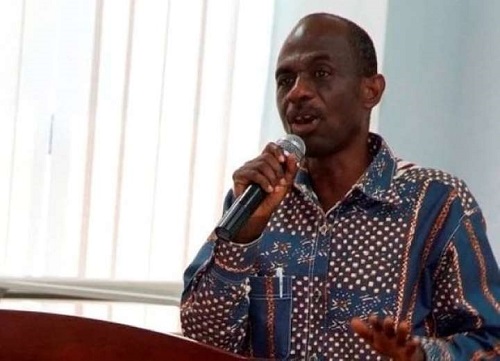 The National Democratic Congress (NDC) has said Akufo-Addo’s appointment of the former Ghana Maritime Authority Managing Director, Kwame Owusu, as the new Board Chairman of the Ghana Revenue Authority (GRA) is an endorsement of corruption.

Mr. Owusu’s tenure as the Ghana Maritime Authority Board Chair will be remembered for the accusations of wasteful expenditure and the NDC in a statement said his new appointment is another opportunity for him to “continue his abuse of the public purse.”

It is our considered view that, the appointment of Mr. Kwame Owusu as the Chairman of the GRA Board is a testament of the fact that President Akufo-Addo endorses corruption and has developed an unlimited capacity to accommodate and promote the corrupt activities of his appointees.

The NDC said it was worried about the new heights “corruption has assumed” and said it was “a complete betrayal of the trust of Ghanaians” on the part of President Akufo-Addo.

“We dare say, that given the present posturing of our President, the war against corruption is far from being won. But, as a nation, we cannot afford to dim our lights on this menace for a moment,” the opposition party stated.

Mr. Kwame Owusu resigned as MD of the Ghana Maritime Authority in February 2019 after he was accused of the financial misappropriation.

But government officials said the resignation was because Mr. Owusu had attained the age of 65 and was only retiring.
He superintended over questionable expenditure at the authority, including spending GHc1 million to renovate his official residence.

He was also budgeted GHc10,000 to host a lunch meeting for 17 people at a hotel he owns prompting conflict of interest concerns.

The government subsequently instituted a probe into the matter but the findings have not been made public.

Find below the full statement

APPOINTMENT OF MR. KWAME OWUSU AS BOARD CHAIRMAN OF GRA – AKUFO-ADDO’S FINAL NAIL IN THE COFFIN OF THE FIGHT AGAINST CORRUPTION

The National Democratic Congress (NDC) joins several well-meaning Ghanaians in expressing our disbelief and complete incredulity over the decision of President Akufo-Addo to appoint Mr. Kwame Owusu to chair the Board of Directors of the Ghana Revenue Authority (GRA).

This appointment comes barely nine (9) months after Mr. Owusu was accused of financial misappropriation as Director-General of the Ghana Maritime Authority.

It would be recalled how Mr. Kwame Owusu made the headlines for the wrong reasons for spearheading and defending dubious and wasteful expenditure at the Ghana Maritime Authority, including spending a whopping GH135,000 on an end of year party for staff at his own hotel, GH10,000 on buffet for 17 people, GHS1 million to renovate his official two-bedroom apartment and fitting as many as eleven (11) air conditioners in it for his own comfort among others.

This needless profligacy on the part of a man who was supposed to be a public servant sent many tongues wagging at the time leading to government instituting a half-hearted probe into the said allegations of financial malfeasance and eventually culminated in Mr. Kwame Owusu’s resignation as Director-General of the Ghana Maritime Authority in February this year.

As we speak, Ghanaians do not know the outcome of the supposed investigations into the conduct of Mr. Kwame Owusu during his tenure at the Ghana Maritime Authority. Instead, Nana Akufo-Addo has rewarded him with another opportunity, this time at the nation’s revenue outfit to continue his abuse of the Public Purse.

It is our considered view that, the appointment of Mr. Kwame Owusu as the Chairman of the GRA Board is a testament of the fact that President Akufo-Addo endorses corruption and has developed an unlimited capacity to accommodate and promote the corrupt activities of his appointees.

This President has perfected the act of being a clearing agent of corruption in his government, as he constantly whitewashes and defends his corrupt appointees.

As we speak, no person has been found culpable and sanctioned for the Australian Visa fraud scandal which caused this nation international embarrassment and shame. Very typical of President Akufo-Addo, the Deputy Minister of Youth and Sports, Mr. Pious Hadzide who superintended over the Australian Commonwealth Games Committee has been cleared of wrongdoing and reassigned to the Ministry of Information as a Deputy Minister.

Till date, the former CEO of the Ghana Export Promotion Authority, Gifty Klenam and her Deputy, Eric Twum, have not refunded monies they illegally appropriated from the state coffers. Eric Twum has been reappointed as a Government Spokesperson under the Ministry of information.

Again, no person has or is being prosecuted relative to the BOST contaminated fuel saga, where the state is yet to recover proceeds of the illegal sale of 5 million liters of contaminated fuel to unregistered and unlicensed businesses.

These are but a few of the many cases of corruption in the Akufo-Addo government which have gone unpunished.

We in the National Democratic Congress are worried, as the majority of Ghanaians, about the unprecedented heights that corruption has assumed under the leadership of President Akufo-Addo. We find his tolerance of corruption, which he claimed to detest in 2016, a complete betrayal of the trust of Ghanaians.

The growing levels of corruption under President Akufo-Addo is a reality that goes beyond mere perception. Only recently, the Ghana Center for Democratic Development (CDD) stated that Ghana has lost a total of GHS9.6 billion through corruption under Akufo-Addo’s watch.

This scary fact must be a source of concern for every well-meaning Ghanaian.

We dare say, that given the present posturing of our President, the war against corruption is far from being won. But, as a nation, we cannot afford to dim our lights on this menace for a moment. We therefore urge all to remain resolute and continue to shine the light on the corrupt Akufo-Addo Government. We also demand the immediate revocation of the appointment of Mr Kwame Owusu as Board Chair of the Ghana Revenue Authority (GRA).