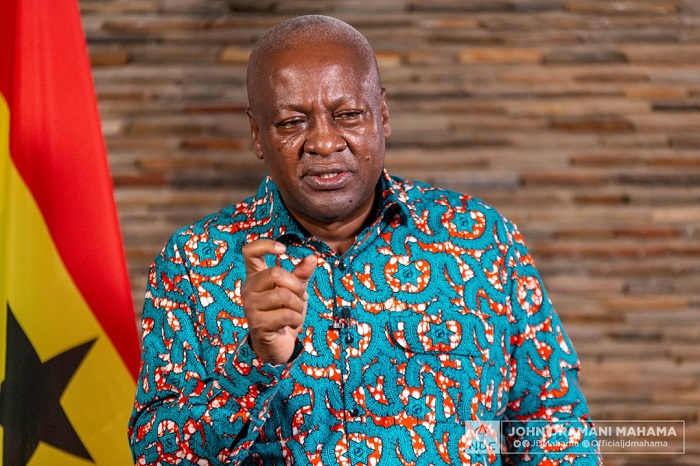 Flagbearer of the National Democratic Congress (NDC) John Mahama is accusing the government of trying to buy election 2020.

Mahama who is currently in Tamale says Akufo-Addo and the NPP have failed miserably and that is why they are trying all means to buy votes.

He said they have picked up information that the government has paid some amount of money into the accounts of police personnel just to deceive them.

"Akufo-Addo has failed and so all he has now is to try and buy the election and so they are spending money as if there is no tomorrow. I just learnt from a group of police officers that some monies have been paid into their account. The NPP know they have destroyed the morale of the police service so they think they can buy our officers with 1000 and 2000 Ghana cedis, they will take the cash and vote them out"

Meanwhile, Mahama has warned he will not accept the results of the 2020 general elections if the polls are marred by chaos and violence like what occurred at Ayawaso West Wuogon.

According to Mahama, the EC should ensure the election is free and transparent and that will ensure all parties accept the results.

Mahama who has already said he won't accept a flawed election speaking in an interview with Kwesi Pratt said should the violence and chaos that marred the Ayawaso by-election occur in the December polls he will not accept the results.

"Who accepts a flawed election. Nana Addo himself has a history of not accepting any election even when they have been the best free and transparent election. He tied me up in court in 2013 for almost a year, when Prof Mills beat him he refused to concede. If the election is free and transparent and I am convinced why not. If they do what they did in Ayawaso West Wuogon who expects me to accept a result like that."

The Ayawaso West by-election took place on 31 January 2019 after the death of the incumbent MP Emmanuel Kyeremateng Agyarko on 21 November 2018. Lydia Alhassan of the New Patriotic Party was elected with 69% of the vote.

Violence erupted in the area of the La-Bawaleshie polling station two hours after the election had started, though there was no death recorded there were casualties. Prampram MP Sam George was assaulted and 18 people were wounded by gunshot.

The perpetrators were masked men and alleged to be National Security Operatives.