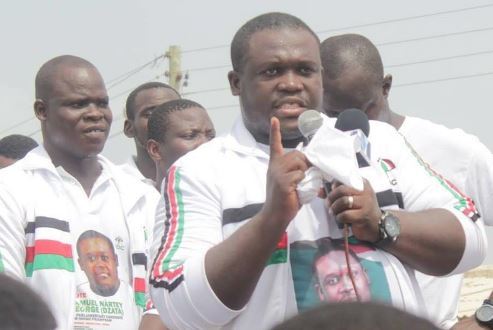 MP for Ningo Prampram, Sam George has described the testimony given to the Ayawaso Commission by the National Security Operative, Bright Ernest Akomea also known as double as a coached lie.

Speaking to Citi FM, Sam George said most of the statements given to the Ayawaso commission show "double" is not a credible witness.

Double today told the commission that he assisted Sam George on several occasions and one of them was at the VIP lounge of the Kotoka International Airport, he claimed Sam George called him on Friday before appearing before the commission on Monday.

Reacting to the claims of double, Sam George said: "the commission appear not to want to probe him for further details because prior to telling these lies about my person double has established to the commission and anybody who is fair-minded will know that he was not a credible witness, the suggestion that he made that he picked a raffle from the driver of a vehicle because he was not given a raffle should have taken the interest of the commission."

Sam George added that he is ready to allow the commission to access his phone records with his telecom provider MTN to verify if he has ever placed a call to double.

He described the claims as couched lie "so again that was a fundamental lie he was coached to tell."