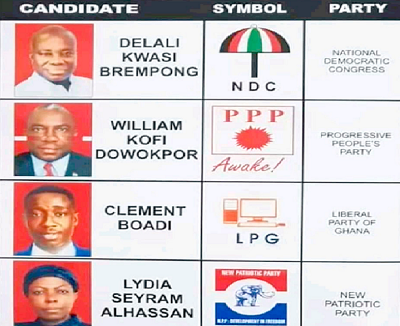 All is set for the by-elections of the Ayawaso West Wuogon constituency's parliamentary seat tomorrow January 31, 2019.

All the political parties are beaming with confidence of annexing the seat that became vacant following the death of the incumbent Member of Parliament (MP), Mr Emmanuel Kyeremateng Agyarko, on November 21, 2018,  who was subsequently buried last weekend.

A look at the four candidates

LPG
Mr Clement Boadi who is the candidate for the LPG in an interview with the Daily Graphic said: “winning is something that we are not compromising on, that is why we have put in everything and left nothing to chance.”

NDC
The NDC candidate, Delali Kwasi Brempong, posits that he does not believe the NPP’s candidate will ever pose a threat to his chances of claiming the seat.

He said his confidence was based on the fact that he had already bagged in excess of 20,000 votes in the 2016 election and that his main contender, the NPP candidate, had nothing to show for it except a fresh, unknown face with accompanied challenges.

PPP
For his part, the PPP candidate, Mr William Dowokpor, said he had observed that the wind of change was not blowing in favour of the NPP as it did in 2016.

Rather, it is against the NPP and the NDC, contending that in 2016, the wind of change was strongly against the NDC because people just wanted them out of power.

He was emphatic that with the support of the remaining Nkrumaist parties, he was confident of emerging as the new MP for the constituency.

NPP
Madam Alhassan, for her part, said security, sanitation, scholarship, women empowerment and youth entrepreneurship would be her focus should she win the seat.

She expressed appreciation to the supporters and the people of the constituency and asked that they continue to remember her, especially on Thursday, the election day.