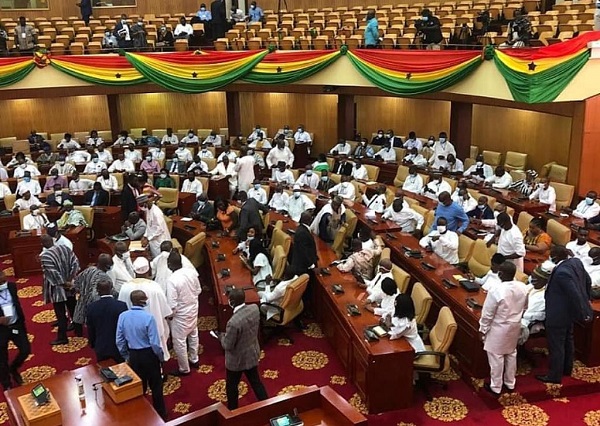 Parliament will today January 15, 2021, will resume sitting after the chaos that happened during the inauguration of the 8th Parliament.

The House’s first engagement will be the resolution of who forms the Majority and Minority of the House.

Three previous meetings between the leadership of both the New Patriotic Party (NPP) Caucus and National Democratic Congress (NDC) Caucus in the House to resolve the matter proved futile.

READ ALSO: We've no difficulty sitting on the left side of the Speaker- Haruna Iddrisu

At a separate news conference in Parliament yesterday, both leaders of the NPP and the NDC caucus Osei Kyei Mensah Bonsu and Haruna Iddrisu say they expect the Speaker to give a fair ruling.

The December 7, 2020 election left the NDC and NPP with 137 seats apiece, with one independent MP, Andrew Asiamah Amoah of Fomena, who has aligned with the NPP.

The NPP side views this declaration as a marker of its Majority in Parliament.

Its leader, Osei Kyei-Mensah-Bonsu also said the Speaker of Parliament in a meeting said the Fomena MP’s decision will determine which side will be the majority.

“When we met the Speaker three days ago, he determined for us that where the Fomena MP decides to pitch camp will determine where the pendulum will swing,” Mr. Kyei-Mensah-Bonsu said at the press conference.

The Leader of the NDC caucus in Parliament, Haruna Iddrisu, said he disagreed with the NPP side.

He noted that the official records of Parliament show 137 seats for both the NDC and NPP and one seat for an independent candidate.

“Advisedly and wisely, he is not seeking to join a political party and therefore nobody should do the easy mathematics of a 137 plus one, Mr. Iddrisu said.

He, however, said his side was open to sitting on the Minority side of the Chamber as long as its numerical strength is respected in the composition of committees and in the determination of leadership.

“The composition should reflect beyond mere numbers and include other factors including leadership of committees,” Mr. Iddrisu said.